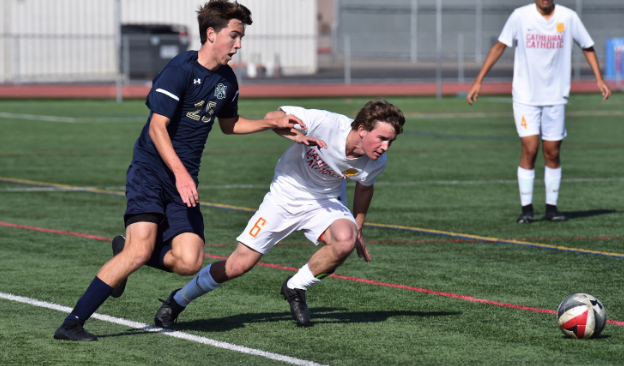 Defender Bradley Allgood ‘20 (6) attacks the ball during their game against San Diego High School during the Parker Cup on November 30th.

The Dons got off to a quicker start this year than last year, and hope to continue this throughout the regular season and into the open playoffs. The players have high hopes of making the playoffs and to win the open division championships, in which they have won 2 of their last 4 appearances.

New to the team, forward Matthew Goddard ‘20 has showcased his skill this season as the only player on the team to average more than one goal per game this season.

“Matt will be the first to tell you that he couldn’t do it without his teammates’ awareness and finding him.” Hetherington said, “He has done a fantastic job putting himself in goal scoring positions and scored some beautiful goals in the first five games.”

Goddard came back from academy soccer to play for the school, and Hetherington noted that his positive attitude has been an asset to the team. Seniors Aidan Cerveny and Diego Argueta have also been a positive influence while leading the team this year.