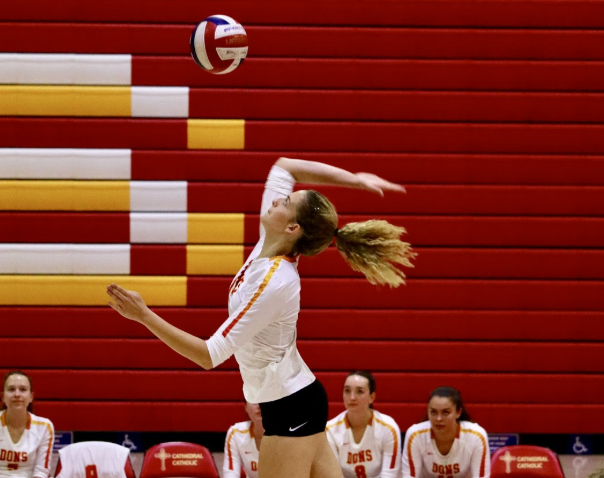 University of Notre Dame-bound Lindsey Miller ‘20 serves for the Lady Dons. The middle blocker has tallied 154 kills and 54 blocks on the season.

The tournament win boosted the Lady Dons onto the national scene giving them the top spot in the latest MaxPreps Xcellent 25 National Rankings.

With the combination of a good record, solid competition, and good team chemistry, CCHS is a force to be reckoned with.

“Everyone on and off the court has contributed to the success that we have endured these last few matches,” CCHS defensive specialist Hannah Mackenhausen ‘20 said. “We have good connections outside of volleyball which enables us to have a strong bond on the court.”

CCHS’ improvement during the season has led to a current eleven match win streak in which the Lady Dons have dropped one set total.

“We’ve kept the winning streak going by really playing together and growing as a team,” CCHS outside hitter Madison Endsley ‘20 said. “It hasn’t been about individual success but our success as a whole.”

The top-ranked Lady Dons are appreciative of the positive publicity surrounding the team.

“This last week has been amazing with so much support,” Mackenhausen said. “It is nice to be recognized for our hard work and dedication.”

CCHS feels it is beginning to hit its stride as moves into the second half of the season.

“With this new found confidence, I think the team is showing the potential we have and how far our season could go,” Endsley said.

CCHS finishes the rest of its season with Western League play before it heads into the San Diego Section California Interscholastic Federation Playoffs. 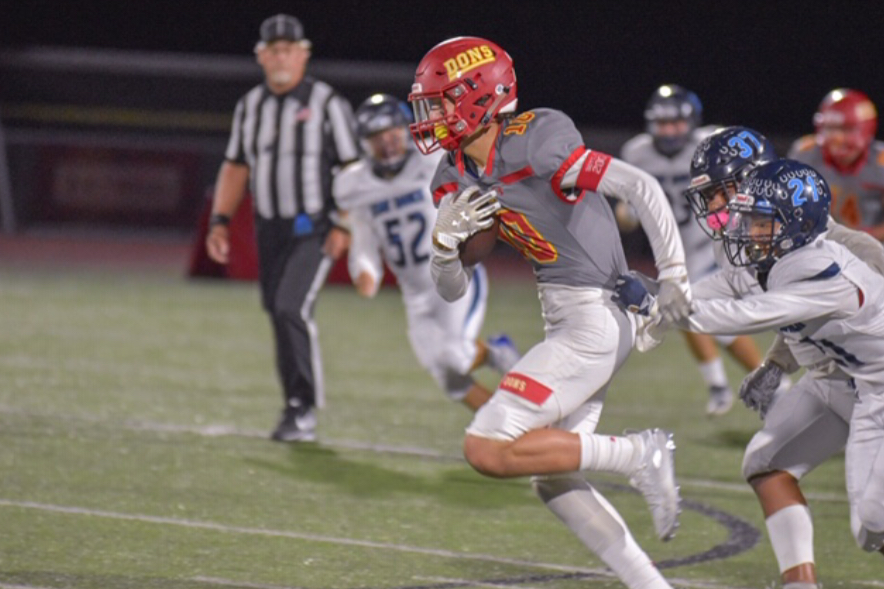 The Cathedral Catholic High School varsity football team has been firing on all cylinders through its first half of the season.

CCHS (5-1), currently ranked number 31 in the nation according to MaxPreps, credits its early success to the groundwork put in each week before its games.

“The biggest key to our success has been our preparation,” CCHS offensive lineman Matthew Mihas ‘21 said.

The Dons opened its season with impressive wins against against Saguaro High School and Corona Centennial High School, both programs ranked top 10 in the nation at the time.

The back-to-back non-conference victories helped push the Dons as high as eighth in the nation according to MaxPreps.

CCHS didn’t worry about the expectations surrounding the team.

“We try to tune out the rankings and forget all that kind of stuff,” Mihas said. “We just focus on getting better on our craft.”

CCHS’ success didn’t come as a surprise, the Dons believe its coaching staff has properly prepared them with film study, conditioning, and rigorous practices.

“Our coaching staff continually puts us in the best position to win,” CCHS wide receiver Colman Smith ‘21 said. “We have been working and practicing extremely hard for the past nine months and it is paying off.”

Through the Dons first six games, both the passing and rushing game have been clicking, CCHS quarterback D.J. Ralph ‘20 has tallied 684 yards throwing, while Zavien Watson ‘20 and Christian Hall ‘21 have rushed for 803 yards and 300 yards respectively.

Overall, CCHS has outscored its opponents 235-112.

CCHS aspires to take the last games as an opportunity to grow as a team.

“Our goals are to win every game from here on out and to continue to improve during  each game,” Mihas said.