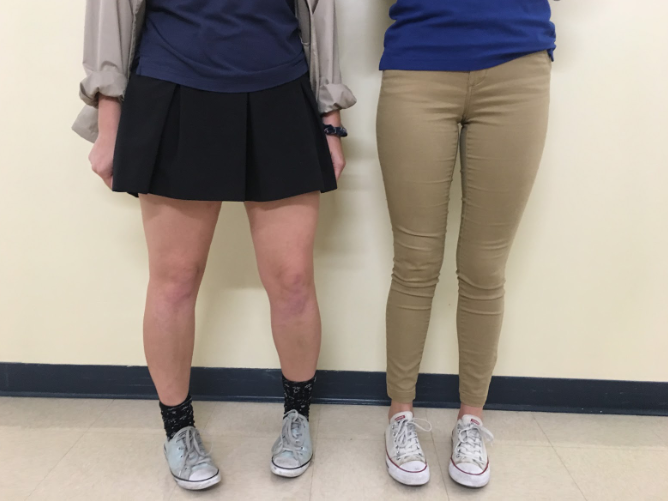 While driven, academic, and conscientious are attributes describing many Cathedral Catholic High School female students, submissive is not one of them.

On May 17, CCHS Principal Dr. Kevin Calkins notified parents and teachers about a drastic change to the 2019-2020 dress code, a change referred to as the skirt ban. The new policy contradicts the restorative discipline policy, increases uniform expenses, and excludes parent and student input on the matter.

During the past two weeks, the women of CCHS have found their voice, but when do their voices become heard? Dozens of students, parents, and alumni have protested, written letters, and spoken out against the policy, but administration has not engaged in the necessary discussions with students.

While it is clear the complaints of male faculty members have been heard and acted upon, skirt advocates have been afforded far less input regarding the matter.

What has led so many community stakeholders to question the new policy is the contradicting nature surrounding the ban.

The 2018-2019 school year marked CCHS’s shift toward restorative discipline—a whole-school, relational approach to building a harmonious school climate and dependence on healthy dialogue to promote good behavior. As a result, CCHS showed a considerable decline in the “thousands of hours of detention” reigning true in years prior.

The recent lack of punishment only has contributed to the abruptness of the new policy.

Forcing change without any means of student body discussion beforehand insinuates a lack of democracy and community. If administration had voiced its concerns to the parents and faculty prior to implementing a polarizing new policy, the situation could have been avoided entirely.

At any private institution, input is valuable. By disregarding the concerns of the students and families, CCHS simultaneously is severing ties with its primary beneficiaries.

In lieu of the ban, alumni have reflected upon the former superior policy, when female students were allowed up to three dress code violations until their skirt privileges were taken away. This idea is only one of many alternatives presented to administration as a fair replacement for the ban.

Expecting an entire population of young women to fund and to present themselves in a gender-neutral manner in order to appease faculty oppresses the female student body as a whole. If the issue truly resides within the comfort of male faculty, banning skirts promotes a sense of intolerance and misogyny. Another solution suggests designating female counselors and staff to help encourage modesty will raise awareness among younger females.

Rather than fostering an uncomfortable divide between staff and students, CCHS administrators must recognize the concerns of all people within the community.

The tuition for the 2019-2020 school year costs approximately $18,000. On top of this, returning female students are being required to fund an entirely new wardrobe of pants, capri pants, and bermuda shorts, a change students deem demeaning and unflattering. In particular, members of the junior class are now expected to purchase enough clothing to last them the 2019-2020 school year only to retire those clothes a year later.

CCHS’s annual used uniform sale also is expected to see a major decline in profit as far fewer options will be available for girls due to the scarcity of pant and short donations.

Expecting the families of female students to burden the cost of new uniforms is not only unfair, but it is entirely impractical.

Cathedral Catholic High School has erupted with a fiery resistance to the new dress code policy that states female students will no longer be allowed skirts, which will take effect next fall. Opposition to the policy focuses on arguments of sexism, prices, style, and the drastic nature of the policy change, but all of these arguments are flawed.

Student protesters lined the sidewalk this week to demonstrate their displeasure with the new policy change, holding various signs reading “my body, my choice,” “short on equality,” and “khaki shorts = body shaming,” but is this really a sexist issue?

The majority of the people opposing the skirt ban would wholeheartedly say yes, citing the line in principal Dr. Kevin Calkins’s email, “Male faculty feel uncomfortable addressing female students about the length of their skirts,” claiming the male faculty is suppressing their rights because they have female bodies.

“I understand the frustration,” CCHS student Lily Hogan-Maguire ‘20 said. “I have one year left here, and I have already spent a lot on skirts. I don’t want to buy pants that I’m going to wear for eight months max. But the posters saying ‘I’m comfortable with my body but my school isn’t’ are completely out of line. That’s not the issue.”

Dr. Calkins finishes his statement by saying, “and even female faculty have expressed frustration with the ongoing challenge of dress code.” The issue of girls consistently being out of dress code with skirts hiked up, so only an inch or two of their thigh is covered must be addressed. CCHS is expected to uphold a respectable image, and when sweatshirts are longer than the skirts being worn, that image deteriorates.

The CCHS administration also released an email this Friday that stated, “It’s also not about the ‘distraction’ of male teachers and administrators.  The way that was mentioned in the previous communication was a product of awkward phrasing, but that wasn’t the point we were trying to make.”

This is not a matter of gender inequality, but rather one of modesty and self-respect.

One of the most prominent arguments of juniors has been the expense of buying new wardrobe pieces for only one more year of school. Besides the fact that khakis are not outrageously expensive, unlike a Dennis Skirt, khakis can be worn outside of school, like at Mass, most jobs, or formal dinners. As opposed to my skirts, which I will likely never wear outside of school.

Khaki can be found at a number of stores, so there is no need to worry that you will be on a fruitless hunt at multiple malls. JCPenny, Old Navy, and Target all have khaki pants for less than $30 a pair and khaki Bermuda shorts for less than $15.

However, many female students are less-than thrilled with the idea of wearing Bermuda shorts, as seen with protesters holding signs that read “Bermuda shorts are ugly.”

Does that matter though?

I go to school for an education, not to look like a Victoria Secret model, but I empathize. I love the summer, when I am able to dress up or down and look the way I want. It boosts confidence levels. However, when I decided to go to a private school, I agreed to give up that freedom for nine months out of the year to school dress code.

The current uniform is already out of style anyway. I personally have never worn a polo shirt on a casual night with friends, but no one thinks twice about our polos because we are all wearing them. Everyone looks the same so the unfashionable stigma around them is widely ignored. The same thing will happen if everyone is in Bermuda shorts.

Many students and parents believe the drastic change in policy is far too harsh and is unfair to the students who have been obeying the dress code.

First of all, it was not drastic.

The school has repeatedly put out messages urging girls to follow skirt guidelines. They allowed students to buy any brand skirt, not just Dennis, so that it would be easier for girls to find something that fit them properly. Before restorative discipline was introduced, large numbers of detentions were issued, but remained ineffective.

“While not every girl wears their skirt above the dress code,” CCHS student Kate Foster ’20 said, “those who do haven’t shown any desire to change, even after being handed detentions and given wider variety of [skirt] brands. The ban is the best way to eliminate the problems of enforcing the skirt dress code.”

The administration tried to ease girls into a policy that would make obeying the dress code simple and easy, but they were widely ignored. They needed to do something that would force girls to obey the dress code.

The argument that students who obeyed the dress code do not deserve this punishment is valid, but they are a minority.

The vast majority of girls wear their skirt more than three inches above the knee, and kudos to the girls who wear theirs properly, but the majority must be addressed.

Besides, wearing pants is not that bad of a punishment.

“[The skirt ban] is a life lesson for all,” CCHS parent Ms. Jennifer McKittrick said. “Privileges can be taken away, and ultimately, there are more important matters to be concerned about.”

Despite the fact that this skirt ban is both warranted and appropriate, the idea of wearing pants every day is not life-altering. Focus on the big picture.