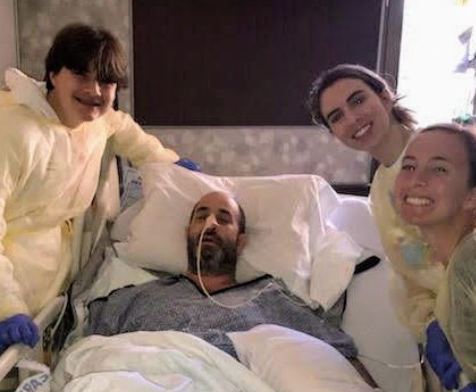 Mr. Jason Gilbert, a U.S. Marine veteran and single father of three Dons, opens the door with a smile on his face and extends his left hand for a handshake. Immediately, his primary concern is hospitality as he offers food and drink. Walking, let alone standing is visibly difficult for Mr. Gilbert as he drifts to the kitchen. He looks tired but his tone is upbeat and disarming.

Eliza Gilbert ‘19 enters the kitchen and bubbly introduces herself, and Aden Gilbert ‘23 follows.

A decorated Christmas tree stands parallel as the family sits down in the well-kept living room in their respective spots, ready to discuss the past few unbelievable months. 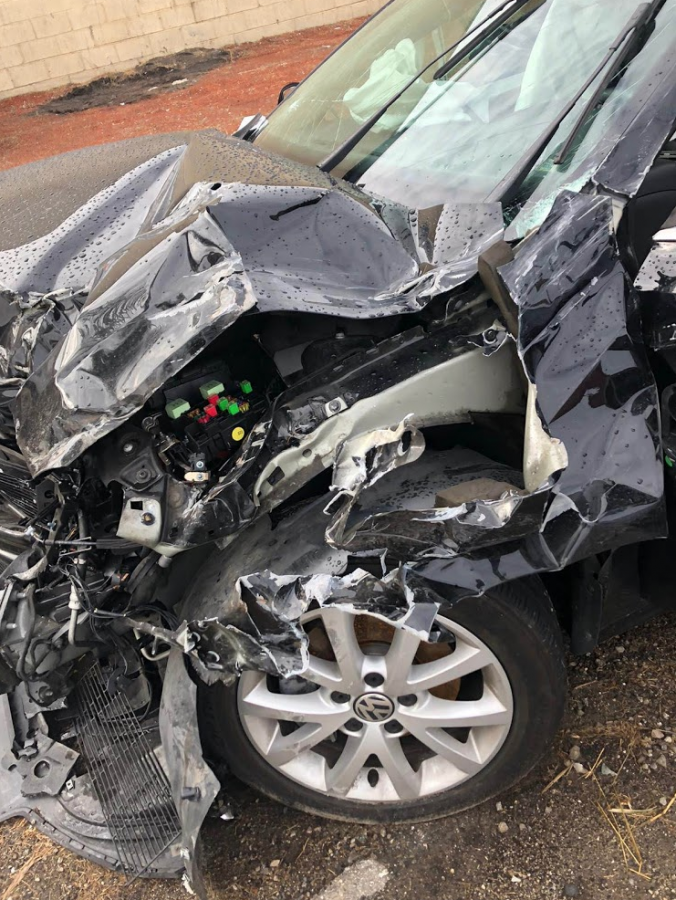 The Gilbert family’s Volkwagen Jetta suffered damage after a collision in November.

Prepared to celebrate Thanksgiving with the whole family, Mr. Gilbert left the house to pick up the last member to join the holiday table, Alexa Gilbert ‘17. A delayed flight in Italy, where Alexa had been studying during her fall semester at University of California Los Angeles, led to a 1 a.m. expected time of arrival at Los Angeles International Airport.

Hearing of the delay, Mr. Gilbert settled in a Carl’s Jr. parking lot, a go-to space for those waiting to pick up late arrivals. A few hours passed before Mr. Gilbert received a message from Alexa, and he headed to LAX to bring his daughter home, which was the last thing Mr. Gilbert remembers from that night.

Planning to surprise Aden, who was in Victorville, California with his mom, Mr. Gilbert and Alexa started towards their Poway home to get some rest before driving up to Victorville for Thanksgiving dinner.

Crashed into the freeway sidewall, which borders the carpool lane, was a large Chevy Silverado truck with no one in the driver’s seat. A drunk driver had abandoned the truck due to his intoxicated state and the vehicle not belonging to him.

Mr. Gilbert swerved right to avoid the car, but the driver’s side of the Gilbert vehicle made contact.

“We felt okay after the first impact,” Alexa said. “My dad was conscious and kept checking in on me and asking if I was alright. I moved my legs, so I knew I was not paralyzed, which was one of my fears. I then went to turn on the hazard lights.”

Seconds later, the second collision occurred, again with a Chevy Silverado truck. However, this truck, traveling 80 mph, smashed into the back of the Gilbert’s Volkswagen Jetta.

“With that impact, I saw my dad hit his head and he went unconscious after that,” Alexa said. “I was scared to see my dad like that, but he was making noises so I knew he had not passed away.

“My memory is a bit spotty after the collision, but I remember hitting the window trying to get the responders to come to our car. The next thing I remember is a flashlight shining in the car and me telling [the first responders] to ‘get my dad, get my dad.’”

Alexa broke nine ribs, her back, both of her collarbones, and she suffered a collapsed lung and a ruptured aorta. With minutes to spare, Alexa received a life-saving permanent stent.

“I was never really scared something would happen to me even though they said my surgery was risky,” Alexa said. “I was only really scared for my dad.”

Mr. Gilbert had ordered Alexa’s favorite pizza the night Alexa was to arrive. Eliza set the pizza out before she went to bed. The next morning, Eliza awoke to 30 missed calls from her sister’s phone, as the nurses had passed it around while Alexa was in surgery.

Eliza eventually received word of the accident and she rushed to her car, passing by the untouched pizza box. The car, however, would not turn on. Still unsure of the magnitude of the injuries and what specific hospital her dad was admitted in, Eliza turned to a local cousin for a ride to Alexa’s hospital.

“I will never forget the drive up,” Eliza said. “Eventually, we got to Alexa, and me and her are very close so we both just started sobbing when we saw each other.”

As the morning progressed, Eliza discovered Mr. Gilbert was at a different hospital a few minutes away.

Mr. Gilbert suffered a traumatic brain injury during the accident.

“I arrived and he was talking nonsense,” Eliza said. “I was really scared because I thought he might be like this forever.”

Eliza kept breaking down so her cousin thought it would be best if they went home and joined some other family members for Thanksgiving dinner while Mr. Gilbert and Alexa continued to recover.

“I could not eat and everyone was asking questions about the situation,” Eliza said. “It was really tough, and I just did not want to talk to anyone.”

The next day, Aden, who had been snowed-in in Victorville for Thanksgiving, was able to see his family.

“I saw Alexa first, and she had a really good energy about her,” Aden said. “She showed me a big gash on the back of her head, but she was so optimistic.”

Mr. Gilbert was eventually put into a medically-induced coma.

“The only memory I have while in the [intensive care unit] was opening my eyes and seeing Eliza’s big smile, and it was like a bright ray of sunshine and seeing Aden and teasing him for having his first zit on his chin,” Mr. Gilbert said.

While in recovery, Mr. Gilbert suffered from respiratory failure, pneumonia, a stomach infection, pain, and immobility.

It was a battle for Mr. Gilbert while in recovery, but he maintained a sense of humor and he was consistently cracking jokes. Mr. Gilbert’s brilliant humor is one of his defining qualities as well as his strength and resilience, according to his children.

Eliza and Aden constantly visited Alexa and their father, as Eliza would sing Mr. Gilbert to sleep each night and provide them with necessary support.

After the medically-induced coma, Mr. Gilbert dealt with paranoia and a lack of awareness. Eliza struggled with seeing her dad’s condition because he has always been one of the sharpest people she knows.

One of the toughest moments for Aden and Eliza was when Mr. Gilbert was strapped to his bed due to his occasional efforts to leave the bed.

“I remember thinking, ‘why are you tying my dad down,’ and he would have a ventilator in too which meant he couldn’t speak,” Eliza said. “Both Aden and I had a moment when that was happening where we both started crying, and it was one of the few times I have seen Aden cry.”

Each family member faced obstacles in the days and months after the accident. While Mr. Gilbert and Alexa focused on recovering, Eliza and Aden had to balance their priorities.

Eliza was faced with the likely future of dropping out of college after her first semester to take care of her family.

Alexa is determined, industrious, and independent, according to her family, so requiring Eliza’s help with daily actions was not a seamless transition.

“I was really happy at first to be home and to not just be in my hospital room with four white walls and a TV,” Alexa said, “but I did not know about all the different challenges that I would have to deal with in my return home. I could not walk down the stairs by myself, I could not wash my hair by myself, and I just couldn’t be out and moving.

“That was one of the toughest parts for me…just realizing I couldn’t be independent.”

Mr. Gilbert struggled with a similar aspect of the process.

“I have had a little bit of guilt with people having to stop what they are doing to help support,” Mr. Gilbert said. “I feel guilty that my family had to go through the holidays without me, but luckily I was able to talk to them on Christmas morning.”

Mr. Gilbert, though not his usual self, remembers his paranoia subsiding and the warmth he felt when his family and friends were around.

“Even though I was only about 10% conscious, I could feel [the loved ones presence], and it felt very reassuring,” Mr. Gilbert said. “In general, to know the support and prayers were there, especially when I came out of unconsciousness, felt really good.”

“The support from the community was insane,” Alexa said. “I just never realized there were that many people who cared about our family. People were bringing us food, and neighbors we had never met were donating clothes because my clothes were ruined in the accident. One person even donated Christmas presents since my dad was not going to be around for the holiday.”

The Cathedral Catholic High School community was particularly supportive, according to Eliza. For Aden, CCHS teachers and counselors were very cooperative to make sure Aden could focus on his family in their time of struggle.

Alexa finished her semester abroad in the hospital via remote connection. Despite her injuries, immobility and pain, she is determined to graduate UCLA in her respective double major a year early this summer.

Finding silver linings in the toughest challenges is often difficult, but the Gilbert family found plenty.

“I learned to appreciate how much my dad does for our family,” Eliza said. “I tried to help with some of his work, and it was really hard. And while he was in the hospital, I missed his humor around the house and just talking to him about whatever and him being so intelligent discussing any topic.”

The Gilberts never allowed the accident to shake their Catholic faith.

“I have always lived my life trying to be very grateful to God and to everyone else so I did not go through any phase where I was angry at God or asked, ‘why me,’ ” Mr. Gilbert said. “I was glad to be alive and, more importantly, I was glad that Alexa was okay.”

The Gilbert family is a tight-knit group whose obstacles only allowed for them to prove their virtue.

“I would say our bonds as a family were strengthened, but then again they were already very strong,” Alexa said. “Now me and Eliza are the two closest sisters in the world, and I just know you cannot separate our family.”

Optimism has defined the outlook of the Gilbert family through the recent months, and for Mr. Gilbert, even his reflections are optimistic.

“Overall this has been positive,” Mr. Gilbert said. “Even though I am in a lot of pain, this accident could have been much worse. Both my team of doctors and Alexa’s team of doctors used the word miracle, which medical professionals don’t use very much.”

The Gilbert family focused more on the details of their fortune during the accident than their misfortune of the accident occurring. Each family member also recognized the unconditional love shown from sibling to sibling or child to father.

“There are families who go through something like this where they hate each other and then they have a near death experience and love each other, and that is not what this situation was because we were already tight,” Mr. Gilbert said. “But what is amazing is the demonstration of the love that you always talk about and these situations really pull out of you and those around you.”