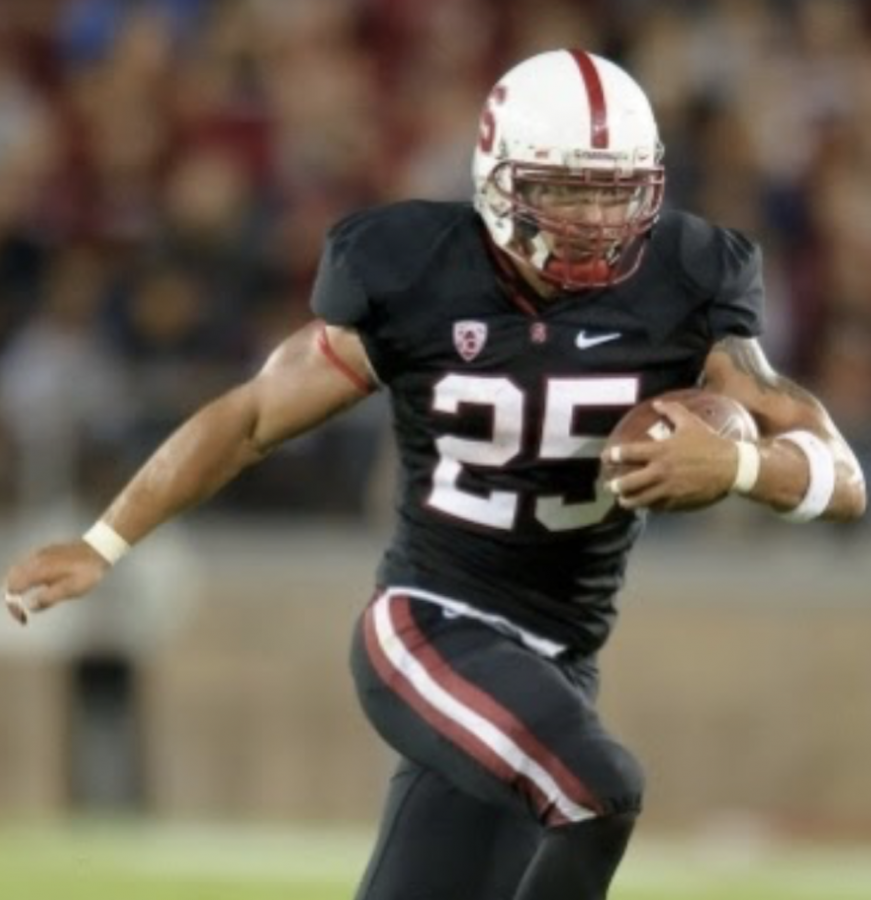 Tyler Gaffney ‘09 carries the ball in open field for the Stanford University Cardinals.

After a five year hiatus, the 10th Annual Dons Sports Hall of Fame Induction Ceremony will be held in the Guadalupe Center at 7:30 p.m. next Saturday. Before induction, the nine new members will be honored next Friday during halftime at the boys varsity basketball game. Deserving athletes, teams, and a Friend of Sport round out this year’s class.

Tyler Gaffney, former CCHS multi-sport athlete and inductee for the Dons Sports Hall of Fame, is thankful for being recognized for his dedication and success.

“It always feels great to earn an honor for something you loved doing,” Gaffney said. “It feels good to be noticed for the work put in.”

Gaffney managed to play baseball and football at the high school, college, and professional level, a feat few athletes have ever accomplished.

Whether it was on the diamond or the gridiron, Gaffney amazed during his CCHS tenure.

Gaffney tallied more than 5,500 yards and contributed 99 touchdowns for the Dons as a running back, but his pure athleticism and self-assurance made him unique.

“Tyler is an incredible athlete, and he could do everything,” CCHS head football coach Mr. Sean Doyle said. “He believed he could do anything, which is a big part of sports.”

The accomplishments piled up after his graduation from CCHS, Gaffney excelled at Stanford University, where he rushed for 1709 yards and 22 total touchdowns in 2013, earning him USA Today Second Team All-American honors, a Pac 12 Championship and Most Valuable Player Award at the Pac 12 Championship game.

The Pittsburgh Pirates selected him in the 24th round of the Major League Baseball First-Year Player Draft and the Carolina Panthers drafted Gaffney in the sixth round of the National Football League Draft. Gaffney played for the State College Spikes in 2012 and the Bradenton Marauders in 2018, a minor league baseball affiliate for the Pittsburgh Pirates. In between Gaffney’s professional baseball years, Gaffney suited up for the Carolina Panthers, New England Patriots, and the Jacksonville Jaguars. During his National Football League Career, Gaffney added two Super Bowl rings to his already loaded trophy case.

“His work ethic was incredible,” Mr. Doyle said. “He prepared his body for football and baseball each year.”

Gaffney credits success to his effort and will to win.

“I think being at the top of any podium is the goal in every sport,” Gaffney said. “We play to be great, get better, and win.”

Former CCHS varsity girls volleyball coach Kelly O’Neill Drobeck will be inducted into the Dons Sports Hall of Fame this Saturday for her consistent and outstanding work on the court.

Currently, CCHS boasts the most San Diego Section California Interscholastic Federation Championships thanks to Drobeck’s dominance from 1998 to 2012.

Following her tenure as a student at the University of San Diego High School, Drobeck continued her volleyball and academic career at San Francisco State University.

Drobeck stands as the first girls volleyball coach to be inducted into the Dons Sports Hall of Fame.

“It was a goal of mine to leave my mark on the program and help CCHS softball become as successful as possible,” Gilliland said.

Gilliland holds multiple single-season records including a .513 batting average and 59 hits during her senior campaign at CCHS.

Gilliland, who attended the University of San Diego after high school, appeared in more than 125 games for the Toreros, and she was named to the 2018 West Coast Conference All-Academic Team.

Gilliland remains humble as she appreciates her teammates and CCHS athletes who helped her softball career.

“I played alongside so many incredibly talented teammates at [CCHS], so it is an absolute honor to be inducted into the Dons Sports Hall of Fame,” Gilliland said. “It feels surreal to be recognized out of all the amazing athletes who have come through [CCHS] softball, and I’m very grateful to have been nominated.”

Athletics was not the only priority for eventual Harvard graduate Victoria Lippert, who earned over a 4.0 grade point average while dominating on the hardwood.

The six-foot forward played in 91 games for the Lady Dons, averaging 21.1 points per game, 7.6 rebounds per game, and 1.5 steals per game in three varsity seasons at CCHS.

Lippert managed to shoot 50% from the field on 1,492 attempts, yielding 1,924 career points during her time at CCHS.

While playing for the Crimson, Lippert ended her career as the 14th leading scorer for Harvard University women’s basketball program.

Lippert portrays the meaning of a student athlete as she successfully produced in the classroom and the court.

From the track field to the concession stands, Mr. Bob Vilven has dedicated  more than 20 years to the CCHS sports community.

Mr. Vilven will become the 12th Friend of Sport member next Saturday to enter the Dons Sports Hall of Fame.

Whether he is running the snack bar or coaching the hurdles team, Mr. Vilven exemplifies what the CCHS community is about.

“He does everything out of the kindness of his heart,” CCHS track and field coach Mr. Dan Geiger said.

Mr. Vilven coaches the hurdles team, and has helped some of the best athletes develop their skills, according to Mr. Geiger.

Mr. Vilven strives to enhance each and every one of his athletes

“On top of everything, he cares about the kids,” Mr. Geiger said. “He works with all kids, no matter the ability level.”

Not only has Mr. Vilven produced a legacy on the track, he has created lifelong bonds.

“He has been a great mentor for us coaches,” Mr. Geiger said. “It’s not just about coaching hurdles, it’s about coaching kids and establishing relationships.”

Whether it’s playing, coaching, or serving in the military, Coco Goodson ‘08 exemplifies the Cathedral Catholic High School spirit, earning herself a position in the Dons Sports Hall of Fame.

During her junior year and first season at UCI, Goodson was an instant gamechanger, leading the Anteaters to its first National Collegiate Athletic Association Tournament appearance in school history.

Goodson was a workhorse in her two years at UCI, starting 44 of 45 games.

Goodson’s insight for the game was apparent as an assistant coach for the Lady Dons two years ago.

“I immediately noticed her knowledge of the game,” CCHS soccer player Sophia Aragón ‘21 said. “When she coached us, she held the same expectations as to those of a college soccer player.”

Following an impressive college career, Goodson was among the nation’s best women’s soccer players as she was drafted 21st overall by the Sky Blue Football Club in the National Women’s Soccer League.

Playing soccer was not Goodson’s final goal, as joining the military fit her needs greatly.

The CCHS girls soccer players use Goodson’s athleticism and characteristics as an example.

“She reflects what it means to be a Don through her compassion, work ethic, selflessness, and mentorship,” Aragón said.

Goodson is well respected in the CCHS community in preparation of being inducted into the Dons Sports Hall of Fame.

“I would characterize her as a dedicated and courageous leader as exemplified by her coaching skills and commitment to the U.S. Army,” Aragón said. “She is more than deserving for the Hall of Fame award.”

Longtime CCHS golf coach and teacher, Mr. Doug McLean will be the first boys golf coach inducted into the Dons Sports Hall of Fame next Saturday.

Mr. McLean’s coaching stint ended in 2016, but his numerous successful seasons will not be forgotten.

Mr. McLean will forever be cemented into CCHS’ sports history and Hall of Fame.

Even though the Dons Sports Hall of Fame is rich with baseball players, Daniel Camarena becomes the 12th and newest member of the club.

Camarena, a two-way player, collected nine home runs and 75 hits during his time on the varsity roster at CCHS.

On the bump, Camarena reached top pitching speeds in the low 90s during his career for the Dons.

The southpaw pitcher was lights out in his high school career, boasting a 1.21 earned run average and a 20-3 record.

The New York Yankees selected Camarena out of high school with its 20th round selection in 2011.

The CCHS 2008 varsity football team becomes the third football team and the ninth team to be inducted into the Dons Sports Hall of Fame.

The State Championship matchup was full of offense, the Dons and Rams tallied 616 and 489 total yards, respectively.

Gaffney led the way for CCHS, accounting for five rushing touchdowns and 337 yards of total offense.

CCHS boasted a balanced attack, contributing 186.9 passing yards a game and 305.6 yards on the ground, alluding to 91 total touchdowns.

“As a team, they were a great group of kids who worked very hard,” CCHS Head Coach Sean Doyle said. “They were extremely talented, it was a great team.”

The CCHS 2008 varsity football team set the program at new heights in which the team looks to replicate.