The feast of Our Lady 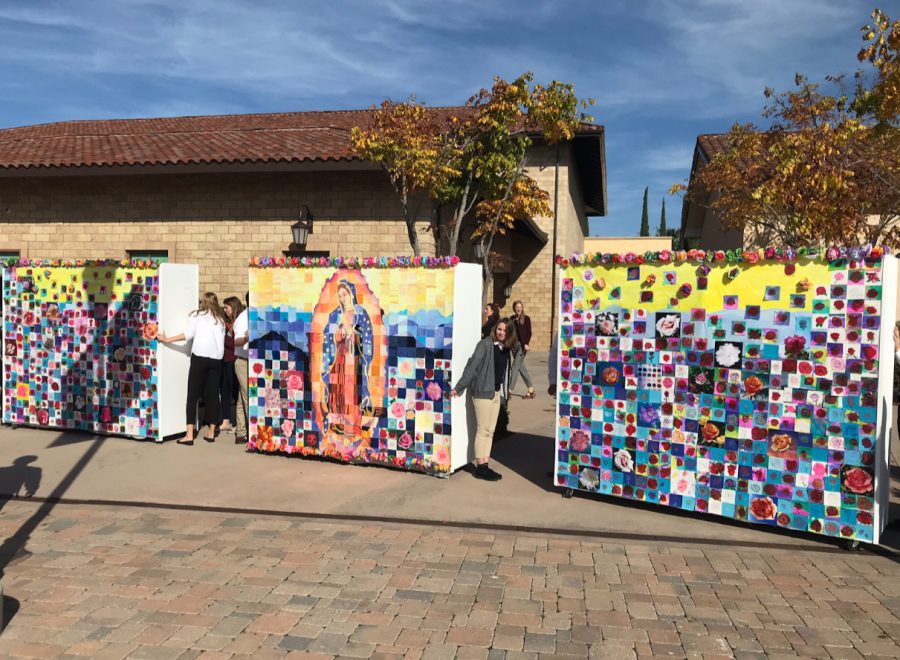 Cathedral Catholic High School students celebrate the feast day of Our Lady of Guadalupe by processing the student-made mural to the chapel during break.

According to Catholic teaching, on Dec. 9, 1531 in Mexico City, the Virgin Mary appeared to a humble man named Juan Diego. She asked Diego to build a shrine in her name on Tepeyac Hill. However, when Diego told the Bishop about the Virgin Mary’s request, he did not believe him.

Later that week, on Dec. 12, Diego asked Mary for guidance to convince the bishop of his story. She instructed him to pick flowers from a nearby hill, even though it was winter, and collect them in his tilma. Despite Diego’s confusion as to how the flowers could bloom in the snow, he did as he was instructed and collected them.

Diego opened the tilma before the bishop, and let the flowers fall to his feet, a beautiful image of the Virgen de Guadalupe displaying itself on his cloak. The Bishop was persuaded.

To honor this feast day, CCHS encourages and celebrates the different talents of its students.

Nicole Hood ‘21 participated in the making of the mural of the Our Lady of Guadalupe.

“I was compelled to participate in the creation of the story of this mural so that I could combine my art skills as well as my knowledge of the story of Juan Diego,” Hood said.

Additionally, the CCHS Mission and Ministry Department invited the Bishop of San Diego, Bishop Robert McElroy, to celebrate Mass with the student body and to accompany the procession of the mural to the chapel.

At lunch, festivities consisted of a rosary service followed by a serving of Mexican food.

“Mary is a really important figure in all different cultures but this one inparticular,” Head of Mission and Ministry Mrs. Stacy Wells said. “It was one of the first times Mary appeared to someone and chose to appear to someone who was Aztec at the time and had just converted to Catholicism.

“So, I feel like it is such a good message that God is always in our life.”

The feast day of Our Lady of Guadalupe, while celebrated by various different cultures around the world, is mainly honored in Mexico.

“As a Hispanic girl with family in Mexico City, this feast day means so much to me,” Hood said. “I rely so much on the Virgen de Guadalupe, and she truly is my guardian.”