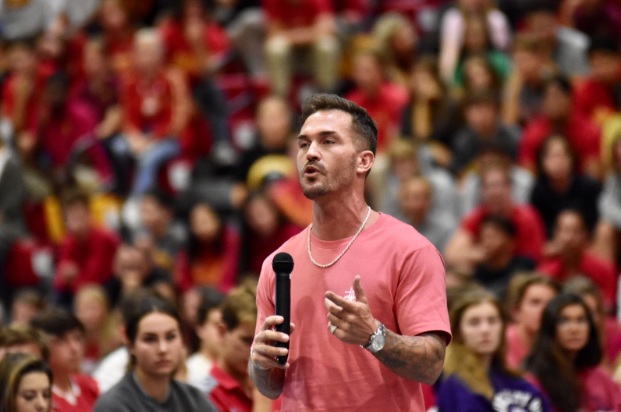 Motivational speaker Mr. Tony Hoffman spoke to CCHS last Friday about his battle with drugs and how he was able to overcome his struggle with depression. His talk opened up several questions about his life after being released from prison, his stance on drugs, and his road to the Olympics.

Teachers and students partook in various activities to educate themselves on drug abuse for Red Ribbon Week last week. Due to parent-teacher conferences on Monday, Cathedral Catholic High School only had four days of school last week. The therapy dogs appeared Tuesday to support the wellness theme of “Don’t be blue, we got you.” Motivational speaker Mr. Tony Hoffman appeared on Friday to talk about his struggle with drug abuse and how he went from imprisonment due to drug offenses to the Olympics. Campus Ministry hosted a game freeze football during lunch for students who wanted to watch. On Saturday, The annual Trunk-or-Treat featured honor societies and clubs at CCHS for students and local community members.