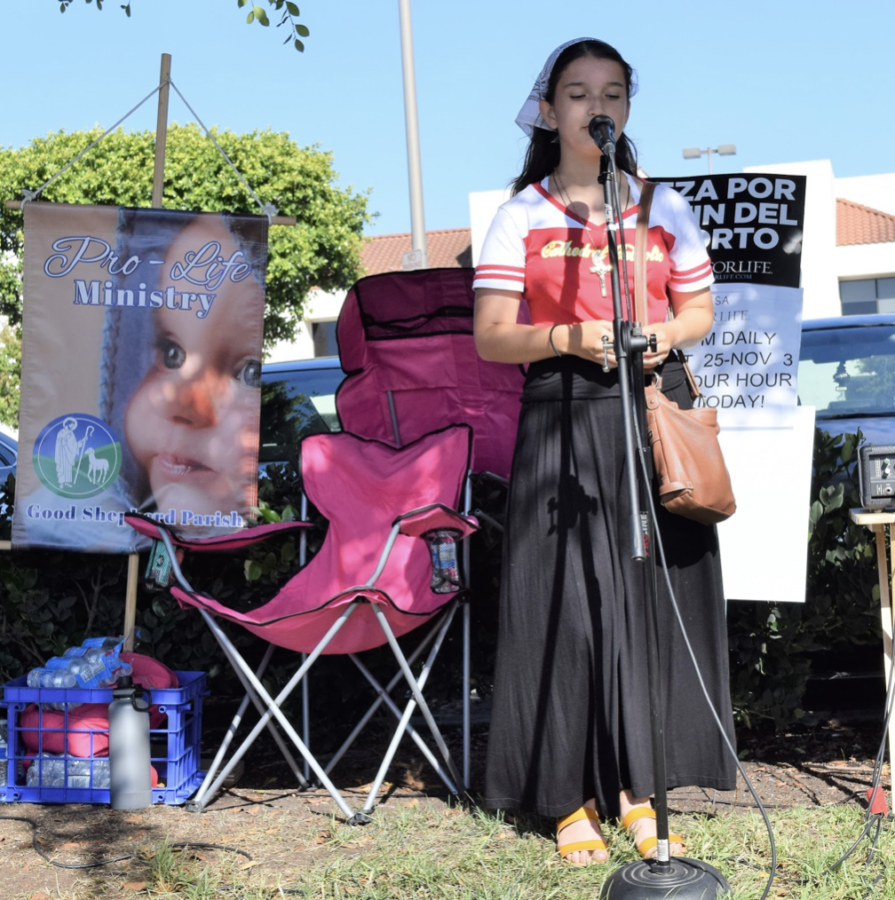 Ana Cardenas ‘21 leads the rosary at the 40 Days for Life: Cast the Vision vigil.

Approximately 16,004 lives saved, 191 abortion workers quit, and 104 abortion centers closed. These statistics pro-choice supporters could have never imagined in 1973 after the Supreme Court affirmed the legalization of women’s right to abortion.

In an effort to end abortion and to protect the lives of unborn children, 40 Days for Life organizes a worldwide 40-day campaign of prayer and fasting, community outreach, and peaceful all-day vigils outside of abortion centers. The campaign takes place twice a year during the spring and fall. Their efforts will continue ceaselessly until abortion is made illegal and unthinkable.

“Many Catholics think the only time of year as a time to give something up is Lent, but this period of time is also a time for us to focus our prayers for the people who need it the most,” Cathedral Catholic High School Dons for Life administrator Ms. Christine LaPorte said.

Forty is a significant number in Christian faith, due to its consistent use throughout salvation history. It is the timeframe that Jesus fasted while in the desert, the number of days in Lent leading up to Easter, and the number of days the Lord brought rain for the flood. During the 40 days of the campaign, supporters take time to remember and to pray for mothers and their babies.

“A lot of times the topic of abortion is always about the head, it’s about the debate,” Ms. LaPorte said. “How are we going to convince people to be pro-life, but it is equally as much about the heart.”

Rather than attacking abortion through politics, 40 Days for Life participants strive to impact communities through their pacifism and serve as an educational experience to the many who witness the campaign. Holding vigils on the sidewalks of abortion facilities pushes the employees to second guess their work and acts as a call to return back to God from their sinful actions.

CCHS student Anthony Graf ‘22 committed himself to be an advocate of life after realizing the threat of abortion on society.

“In short, abortion is the murder of an innocent life, and once the pro-life movement brings people to that realization, I don’t think anyone would or even could advocate for it,” Graf said. “When you look at our generation, a third of it is missing because of abortion. That’s thousands of unique humans whose personalities, gifts, and talents we’re missing.”

Abortion is the leading cause of death in the world, and it is estimated that 40 million lives are taken because of it every year. According to the pro-life stance, innocent human beings that have no voice to stand up for themselves are being killed never having seen the light of day and not being able to experience God through humane ways. Catholics express how it is unfair and unjust that people who are able to experience life are given the right to take that experience away from the unborn.

“I got involved because [abortion] is such a scourge on our country,” 40 Days for Life advocate Ms. Patricia Larsen said. “Those babies are so vulnerable and have no voice. They have no one to speak up for them except us. They are my unborn brothers and sisters, and I have to speak up for them because they can’t.”

Unborn babies have been given a voice by pro-life activists worldwide. The ongoing movement has played a large role in abortion rates dropping to their lowest since Roe v. Wade in 1973.

“The young people give me a lot of hope,” Larsen said. “They have so much energy and passion about life, pro-life, and ending abortion.”