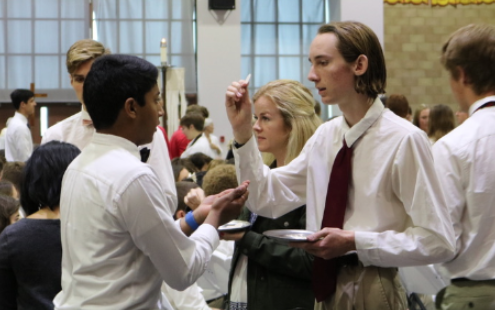 Campus Ministers distribute the Eucharist to fellow classmates during one of many bimonthly all-school Masses.

As three Cathedral Catholic High School students strolled into the Pacific Highlands shopping center after school on Ash Wednesday, teenagers from nearby public schools ridiculed the ashes the students received a few hours prior during Ash Wednesday Mass.

Kristin Logemann ‘20, Remy Reeb ‘20, and Will Neddermeyer ‘20 visited the Pacific Highlands shopping center Luna Grill to get lunch after the students watched a CCHS badminton game.

“We just wanted to eat,” Logemann said. “A group of five teenagers approached us in front of Luna Grill and started mocking our ashes by pretending to draw crosses on their heads using Sharpies.”

“The group just started laughing hysterically at our ashes where everyone was trying to eat,” Neddermeyer said. “We tried our best to ignore them, but they continued to walk past us and try to antagonize us.”

Though the incident seems short-lived and no physical harm occurred, each student agrees there should be no reason for people to get ridiculed due to their ashes and religious practices.

“I have been criticized on Ash Wednesday before,” Logemann said. “Ash Wednesday seems to be notorious for this mockery and ridicule because people believe the ashes give them some sort of right to criticize our practices.”

However, absurd behavior does not cease after Ash Wednesday.

Around the world, Catholics face discrimination and unfair treatment each and every day because of their religious practices.

“The problem exists worldwide and has existed throughout history,” Father Patrick Wainwright said. “There have always been and will always be other people, groups and religions that target Catholics for no reason other than because they are Catholic.”

Since the beginning of the year, France saw a major increase in attacks against Catholic churches, and authorities have not published a reason behind the attacks. Vandals smashed statues, destroyed tabernacles, burned crosses, and littered consecrated hosts across the aisles of churches.

On May 17, arsonists set the historic Saint-Sulpice church on fire after midday Mass. Although no one was injured in the attack, the event sparked controversy about the rise of anti-Catholic views in France.

“Generally in society, it has become politically correct and an acceptable bias to speak against Catholics,” Father Wainwright said. “Ultimately, Catholicism has the truth and stands for the truth. Therefore, others want and will find any way to attack that truth.”

There are more than 1.2 billion Catholics in the world today, according to the U.S. Central Intelligence Agency. So, people should not feel alone when they face discrimination.

No matter the harsh treatment they receive, Catholics should not be ashamed of their religious beliefs and practices, Father Wainwright said.

“It is not wrong to have a doubt or questions about our faith,” Father Wainwright said. “We cannot let the doubt fester inside of us due to harsh treatment, and we need to turn to God in prayer and ask Him to increase our faith, for guidance or to answer difficult questions.”

“Students should never be ashamed of their faith and especially not their school,” Reeb said. “They can always turn to their friends, a religion teacher, or a priest to ask a question and learn about their faith.”