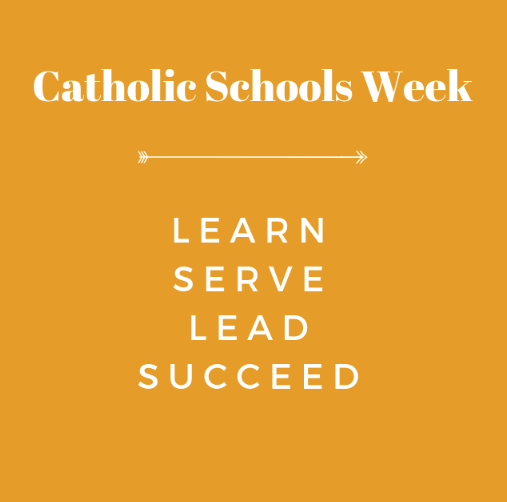 Aidan Cerveny ‘19, who attended Catholic school since kindergarten, cannot imagine his life without it.

“[Catholic school] has taught me the importance of compassion, empathy, truth, knowledge, and faith,” Cerveny said. “It is this allowance to practice faith that in turn flourishes and illuminates the beneficial traits Catholicism preaches.”

“Each of these days will have fun activities at lunch, as well as a prayer that focuses on the importances of Catholic education and this year’s CSW theme,” Cerveny said.

Students may receive M&Ms on Monday during lunch with notes attached detailing different opportunities campus ministers foster on and outside of the CCHS campus to spread God’s word.

In an effort to encourage past and present educators, students can write letters Thursday at lunch to CCHS teachers and elementary parochial school teachers.

“The letters to local parochial schools will help encourage them to keep up the good work,” Dean of Mission and Ministry, Mrs. Stacy Wells said.

Students and faculty also will attend the Winter Rally on Friday in the Claver Center, and they will attend Winter Formal on Saturday night at the Sheraton San Diego Hotel & Marina.

The game was close, with USF leading for most of the game, but USD eventually won 67-63, according to CCHS student Blake Laureti ‘19, who attended the game.

CSW originated in 1974 as a way to bring awareness to the integration of ethical and academic education Catholic schools offer to youth.

The decline in enrollment can be attributed to increased tuition prices, secular private school options, and improvements in public schools, according to Mrs. Wells.

“We hope to remind CCHS students of the blessing of a Catholic education in all aspects of life not only academia,” Cerveny said. “We also hope to extend this message to all members of the community around us, opening their eyes to the benefits of Catholic education and thanking those who currently make it possible.”