One trench at a time 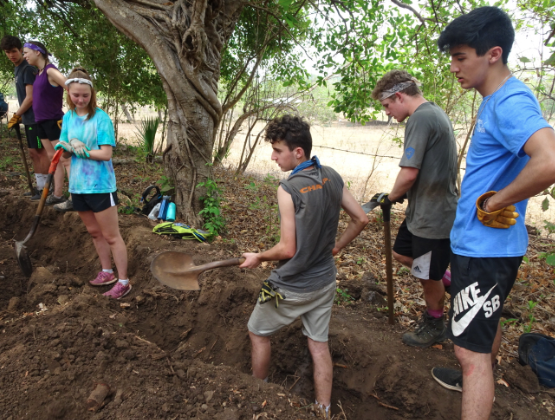 Despite the humid weather, Dons participating in the Nicaragua trip keep spirits high whilst digging trenches in El Pedregal.

However, Montali, despite her lack of Spanish, connected with the Nicaraguans on a deep and personal level.

“I learned that only 7 percent of communication happens through actual words that are said, and that communication is 70 percent body language and 23 percent voice inflection,” Montali said. “I also bonded with many Nicaraguans who spoke English, specifically a man named Julio. We talked about our lives, and I realized that they are more similar than I could have ever imagined.”

Led by CCHS religion teachers Ms. Alison Purpera, Mr. Jeff Gramme, and Ms. Marie Lopez, and later joined by two youth groups and one high school from Georgia, the Dons arrived on March 31 in Managua, Nicaragua. With Easter being the next day, the group celebrated Jesus’ resurrection by hiking a volcano and attending a Mass celebrated by a Georgian priest.

The group stayed at the Amigos For Christ camp in Chinandega, taking a bus to El Pedregal on Monday, Tuesday, Thursday, and Friday. The group spent its six-hour days digging trenches, which were then filled with pipeline that eventually will lead into the village, providing approximately 160 families with clean water.

In addition to digging trenches, the group interacted with locals.

“The main goal is the idea of relationships over progress,” Mr. Gramme said. “Even if you didn’t know spanish, you were encouraged to get to know the Nicaraguans well, which was easy because they worked side-by-side with us.”

The Amigos for Christ staff and volunteers met together twice a day for “Devo,” which is short for devotional. The staff relayed the agenda and presented a focus, such as “togetherness” or “bright spots,” for the volunteers to think about throughout the day. In the morning, they read a Bible passage that mirrored the focus, and they would break up into small groups at night to reflect on the day.

“I enjoyed beginning and ending the day thinking about the same focus, and analyzing how each of us carried out our own interpretation of the days’ focus during our time at the work site,” Montali said.

On Wednesday, the group took the day off to rest, to eat lunch in town, and to play chair basketball. Additionally, they visited a school in La Chuscada, seeing an example of the 7-year plan initiated by Amigos For Christ that hopes to progress the underdeveloped villages in Nicaragua after a century of hardships.

In 1999, John Blend and Jack Schiveree founded Amigos for Christ in order to combat the abundance of problems Nicaraguans face by practicing being good vecinos [neighbors]. “Vecinos who listen well, build infrastructure for change, and pick up a shovel when the time comes. Vecinos who invest our lives in Nicaraguan life,” according to AmigosForChrist.org.

The seven-year plan illustrates this philosophy in which Amigos For Christ community leads a project that eventually provides a village with a clean water system, then bathroom and kitchens, improved healthcare, better education, and finally it boosts the village’s economy, according to Partnerships Growth Coordinator Ms. Michelle Warner.

When the Dons visited the school in La Chuscada, they not only saw the astounding developed done by Amigos For Christ mission workers, but they also got to meet and to play with more children.

Students at CCHS who want to get involved can read through the Amigos For Christ website, or donate to the gofundme.

The application for the Nicaragua trip for the 2018-2019 school year will be released in September, and a number of informational meetings follow suit. The number of spots on the plan determines how many students can go on the trip. The trip generally costs around $1700.

“Don’t let cost be a deterrent,” Ms. Purpera said. “We try and help you subsidize the cost through graduated payments and we try every year to make it easier. I would recommend praying about it and talk to one of the students who has been on the trip in the past.”

“I returned from Nicaragua with a different perspective on life,” Rhodes said. “Despite the lack of material possessions the Nicaraguans possess, they were so joyful, soulful, and welcoming, an idea which I will try and carry with me for the rest of my life.”