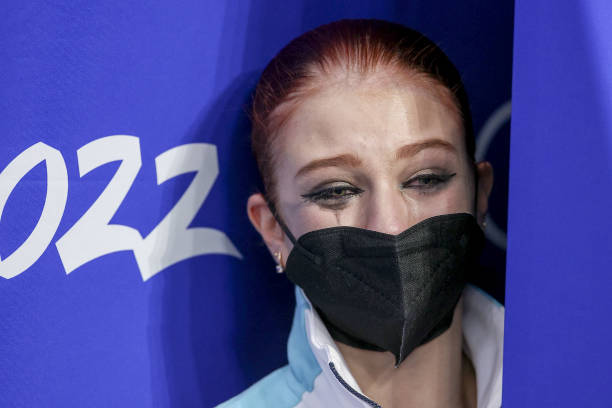 Despite the ROC winning silver at the women’s figure skating event, Alexandra Trusova’s tear streaked mascara ran down her cheeks as she held her award.

Yesterday, the medal ceremony was announced, due to Kamila Valieva’s unexpected fall to fourth. Yet as the results for the podium were released, broadcasters caught the cries of another Russian skater, Alexandra Trusova. Trusova, age 17, is also coached by Eteri Tutberidze, world renowned figure skating coach of Yulia Lipnitskaya, Alina Zagitova, Evgenia Medvedeva, Aliona Kostornaia, Anna Scherbakova, and Kamila Valieva.

Though she had landed five quadruple jumps, Trusova won silver rather than gold. Spectators translated her words to, “Everyone has a gold medal, everyone, but not me. I hate skating. I hate it. I ate this sport. I will never skate again. Never. It’s impossible. That’s not how it should be.”

Trusova currently holds many records in the Guinness Book of World Records for being the first female figure skater to land a quad Lutz, quad flip, and quad toe loop. She was also the first woman to land five quads in the Olympics during her free skate ‘Cruella.’ In comparison, Nathen Chen had also landed five quadruple jumps and earned Olympic gold this season.

Many argue that her score was accurately placed, as her artistic component was not comparable to the Olympic champion, Anna Scherbakova’s. However, a nearly impossible feat that Trusova had worked three years for was finally accomplished, and was not received well.

In the last three years of Trusova’s career, she has been receiving bronze and silver medals continuously, even with her titles as ‘the Jumping Fairy’ and ‘the Quad Queen’. She consistently sacrificed her scoring in her never-ending pursuit of jumping five quads in a program. But when she finally achieved it after hard years of pressure and rebuke from spectators, she peaked at silver.

In comparison, Scherbakova jumped and landed two quads during her free skate. Valieva’s program consisted of three, and Trusova’s program was made of five. Of the three students under Tutberidze who were expected to sweep the podium: Valieva would presumably win the gold due to both her mastery of technical and artistic components; Trusova would win silver should she land all five quads; Scherbakova would win bronze with her lyrical grace and effortlessness. When Valieva fell to fourth, many expected Trusova to be the gold winner; yet because this did not happen, spectators may understand Trusova’s outburst at the Olympics.

In fact, many were most likely relieved that Valieva had fallen such as the infamous words of Johnny Weir, who exclaimed, “Thank God!” To which Tara Lipinski quickly added,

“Thank goodness for all other medalists to have that moment.” Lipinski and Weir have openly spoken against Valieva’s participation in the Olympic event. The International Olympic Committee (IOC) had planned to withhold the medal ceremony should Valieva finish on the podium.

Valieva herself was seen speaking about this, as she sat on the sidelines after receiving her score. She’d smiled and said between her sobs, “But now the ceremony will not be cancelled.” However the fifteen year old was barely consoled after stepping off from the ice. She was immediately bombarded with Tutberidze’s harsh words,

“Why did you let it go? Explain to me, why. Why did [you] stop fighting? You let it go after that axel.”

In the background, Trusova was also seen crying and refusing to skate to the ice to claim her medal. Viewers say that she had to be pushed out onto the ice towards the podium.

Afterwards, Trusova explained that she was not in a good state of mind, “I wanted to cry, so I cried. I’ve been [alone for] three weeks without my mom, my dogs.”

Scherbakova, the Olympic champion herself, sat alone upon hearing the news of her victory. However, the skater did not jump or cheer for joy, instead she sat silently and listened blankly to the chaos that continued near the rink. Beside her was Kaori Sakamoto, Olympic bronze medalist from Japan, who congratulated her.

The gold medalist explained that, “During Kamila’s [free skate], I was just thinking the Olympics are done. I saw from her first jump what a burden it was for her- I will tell her how I feel about it personally later…. This has been what I’ve been working toward everyday. I still can’t comprehend what has happened- on one hand, I feel this emptiness inside.” Valieva and Scherbakova share a fond friendship both on and off the ice.

Perhaps the only person who was excited about their victory was Sakamoto, who grinned as she happily held her bronze and cheered.