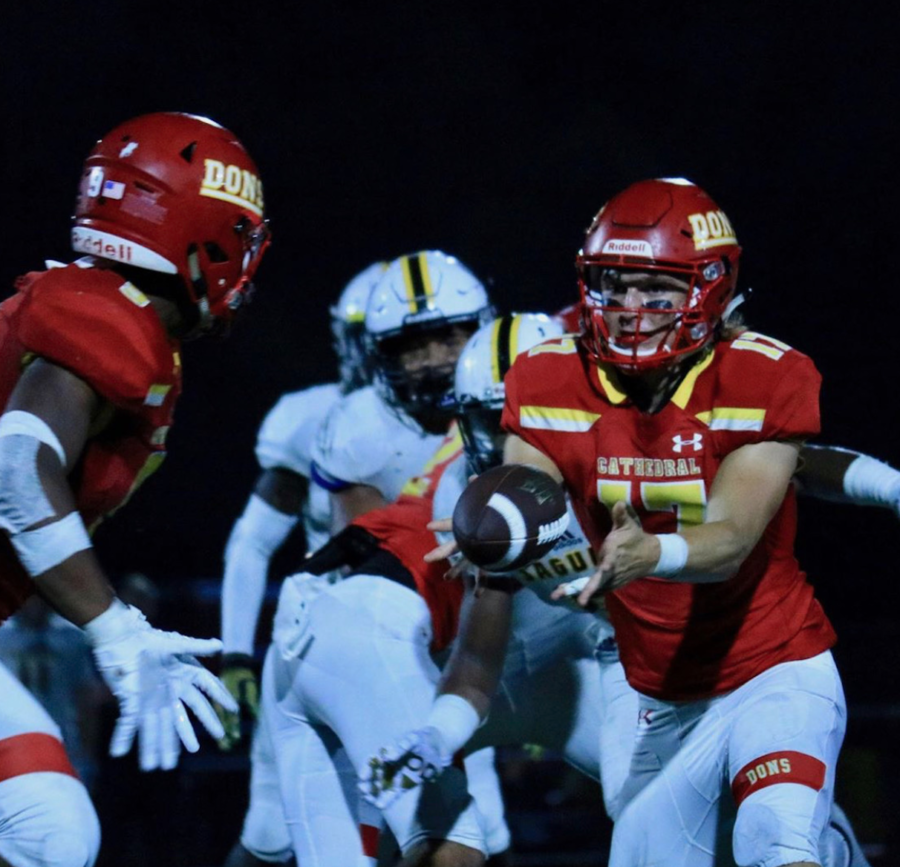 A full slate of games with national talent occurred, but the finale of the Dons and Sabercats filled approximately 5,000 people in Manchester Stadium.

CCHS (2-0), previously ranked 38th nationally, and SHS (1-1), ranked first in Arizona and ninth nationally, both entered the near-even matchup hungry for a win.

Defense was the theme of the first half, as the Dons led 6-3 going into halftime knowing they could not get complacent for the second half.

“We went into the locker room with the mindset that this is our game and we need to keep applying pressure,” CCHS cornerback Dee’shon Swafford ‘21 said.

Pressure was applied early in the third quarter when Swafford intercepted a Sabercat pass and returned the ball into plus territory, leading to a Zavien Watson ‘20 rushing touchdown.

After a failed two point conversion, the Dons led 12-3 and continued its balanced play.

“After I made the play, the team took it to another level,” Swafford said.

SHS didn’t go away quietly, answering right back with a touchdown themselves narrowing the margin to 12-10.

The Dons got the ball back and moved the chains consistently by keeping the ball on the ground. The CCHS steady running attack led them to a fourth and goal situation at the five yard line, when Watson took a pitch to the right side and muscled his way into the end zone.

After a blocked point after touchdown attempt, CCHS led 18-10.

With little time remaining in the game, the Sabercats mustered a fast-styled offense that came up a few yards short on fourth down from the five yard line.

CCHS readied itself with extensive planning.

“All week we prepared for a dog fight, and we came out on top,” Swafford said.

CCHS won its second consecutive Honor Bowl meeting as it held on for a 18-10 victory.

The Dons improve their national ranking to 19 and their state ranking to five.

The road for the Dons will not get easier as they face off with sixth ranked Centennial High School from Corona, CA next Friday at home.