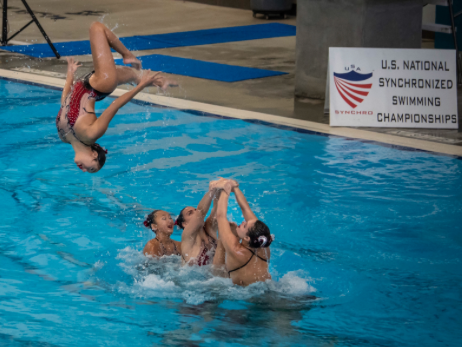 Alexandra Suarez ‘18 and her team, the Santa Clara Aquamaids, perform a lift at the 2018 U.S. Junior National Synchronized Swimming Championships in Lewisville, Texas, where the team won gold. 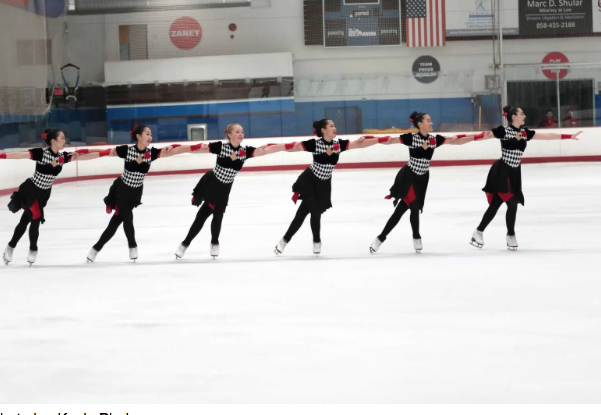 Remy Reeb ‘20 (second from the right) and her team members perform the wheel element during their annual 2018 showcase at the San Diego Ice Arena.

The bustle of competition permeates the atmosphere as she and her team arrive, their skirts rustling with each step of their skates. The pressure is on. She takes a deep breath of brisk air to calm her nerves, and she steps onto the ice. The music begins as her teammates move in perfect synchronization, performing difficult footwork, flowing across the ice. She moves with them and hopes her feet will not fail.

Remy Reeb ‘20 is no ordinary Cathedral Catholic High School student. A synchronized figure skater, Reeb balances her busy school life while waking up at 3.am. for morning practices and national competitions.

“Certain elements of synchronized figure skating are very challenging,” Reeb said. “You have to rely on your teammates and be a skilled individual skater to succeed at competitions.”

Synchronized figure skating, a team sport in which 8-20 skaters perform a program together, is characterized by teamwork, speed, intricate formations, and challenging step sequences.

Reeb, one of the 19 members of Team Del Sol, a San Diego-based synchronized skating team, competes at the intermediate level. Her passion for skating was sparked eight years ago after skating at a friend’s birthday party.

“After that I just fell in love with it, and I begged my mom sign me up for lessons until she finally gave in,” Reeb said.

Now in her seventh season of synchronized skating, Reeb spends about 12 hours every week at the San Diego Ice Arena, practicing off-ice warmups, on-ice warmups, cardio, and element work to keep her prepared for competitions.

“When Remy first joined Team Del Sol, she had to step it up, because our other members had more powerful individual skating skills,” Canadian gold medalist, USFSA gold medalist, and Team Del Sol coach Mrs. Karen Wiesmeier said. “But with her enthusiasm and skill, she’s become a great part of the team.”

Each season, Reeb and her team attend up to eight competitions. Most statewide competitions take place at the Anaheim ICE arena, but the team also competes every year at the Dr. Richard Porter Synchronized Classic in Ann Arbor, Michigan.

“Synchronized skating teaches the team lifelong discipline and organizational skills that come together to create a beautiful program at competitions,” Mrs. Wiesmeier said.

Sectionals and the National Synchronized Skating Championship, the most highly anticipated competitions for Team Del Sol, have been held in Michigan, North Dakota, Oregon, Kansas, and Illinois during recent years.

The sectional competition divides synchronized skating teams into Pacific coast, midwest, and east coast regions, with four spots in nationals offered to each region. After teams compete in sectionals, a total of 12 teams from across the U.S. are chosen for nationals.

Reeb has qualified for nationals every year since she began skating.

Scoring in synchronized figure skating competitions is determined by rules established by the International Skating Union (ISU) Judging System, in which part of a team’s final score comes from a technical panel, while the other part comes from a judging panel that evaluates the execution of each element.

“The most nerve racking part of skating for me is actually after we skate,” Reeb said. “Once the program finishes and we take our bows, we are sent to an area off the ice called the Kiss and Cry where you find out your score and your current position in the competition.”

Last season, Reeb and her team placed fourth at nationals, winning the Pewter Medal and becoming national champions for a second consecutive year.

“The teams make it look so easy, but it’s not at all,” Mrs. Wiesmeier said. “They have to be willing to do whatever it takes for our team.”

Currently, Reeb stands as a four-time sectional champion and medalist. She and Team Del Sol had their first practice of the 2018-2019 season on May 1, and they look forward to sectionals and nationals in January and February of 2019, respectively.

“Synchronized figure skating has been a huge part of my life,” Reeb said. “It’s amazing to be able to do a sport I love with people I love.”

Her legs burn, exhausted. Her lungs crave oxygen. She strains to keep the beat for her teammates’ sake. Her whole body aches, screaming for rest. If she takes even a fraction of a second to pause, she will ruin the entire performance.

This experience is reality for Alexandra Suarez ‘18, a Cathedral Catholic High School student and national-caliber synchronized swimmer, who gracefully glides through the pool sporting a flashy swimsuit, bright and extravagant makeup, and bright smile, convincing onlookers she feels no pain, entrancing them with a seemingly effortless performance.

“Above the surface you have to perform and appear calm and energetic, but below the surface you are kicking, feeling fatigue, and thinking about the choreography,” Suarez said. “It’s pretty difficult to make things look easy when you are tired and out of oxygen, but we work hard at practice to push through it.”

Swim England, the national governing body for swimming in England, compares synchronized swimming to “running for up to five minutes while performing acrobatics, holding your breath, looking graceful, and having to keep in time to music.”

Suarez, having competed in the sport since she was 10 years old, has train with the U.S. Senior National Team, and she currently trains with the Santa Clara Aquamaids, a San Francisco Bay Area synchronized swimming organization established in 1964.

In addition to her team’s success, Suarez recently committed to Stanford University to continue her education and further pursue synchronized swimming.

“I started talking to coaches my junior year, and at the beginning of my senior year, I got to go visit schools and teams,” Suarez said. “I picked Stanford because of its strong academic programs, and I was excited to be able to stay in California.”

Despite Stanford’s acceptance rate dropping to 4.29 percent with a mere 2,040 students of 47,450 applicants accepted for the Fall 2018 semester, the university’s lowest rate in history according to CBS, Suarez claimed her spot through hard work in both the classroom and the pool.

“I’ve always tried to push myself in school by taking as many hard classes as I can with my swim schedule,” Suarez said. “I prioritize my grades, and I always make time to study.”

Since starting synchronized swimming at a neighbor’s behest in 2010, Suarez has come to love the sport, especially the bond built with her teammates, Suarez said.

However, there are aspects of the sport she dislikes, such as the misunderstanding and ignorance most people have in regard to synchronized swimming.

Typical practices run 4-10 hours a day, depending the day of the week, Suarez said. Usually starting with  warm-up laps, the team then swims through its routines to prepare for competition.

Team and duet events, the only two synchronized swimming events played in the Olympics, each include a free routine and a technical routine. Other competitions, such as World Championships, include solo, duet, team, and combination events.

Technical routines are predetermined and performed strictly according to certain elements, while in free routines, swimmers create their own unique performance where they are required to show their creativity in choreography, dancing, and coordination.

Suarez’s family serves as a constant influence in her life through its constant support, motivating her drive to continue her swimming career into college.

“My family has always supported my decisions that I’ve made in my training, especially my decision to go to Northern California for most of my training,” Suarez said. “I am very excited to swim at the collegiate level, although I’m not really sure what I would like to do beyond the next four years.”

Suarez looks forward to her years swimming and studying at Stanford, where she hopes to improve both athletically and academically for her upcoming four years spent in Northern California.

“I think [synchronized swimming] is unique because it’s a performance sport that requires a lot of endurance,” Suarez said. “You also have to smile through the pain and make it look easy.”