Dons for Life Participates in the 1Life L.A. Walk 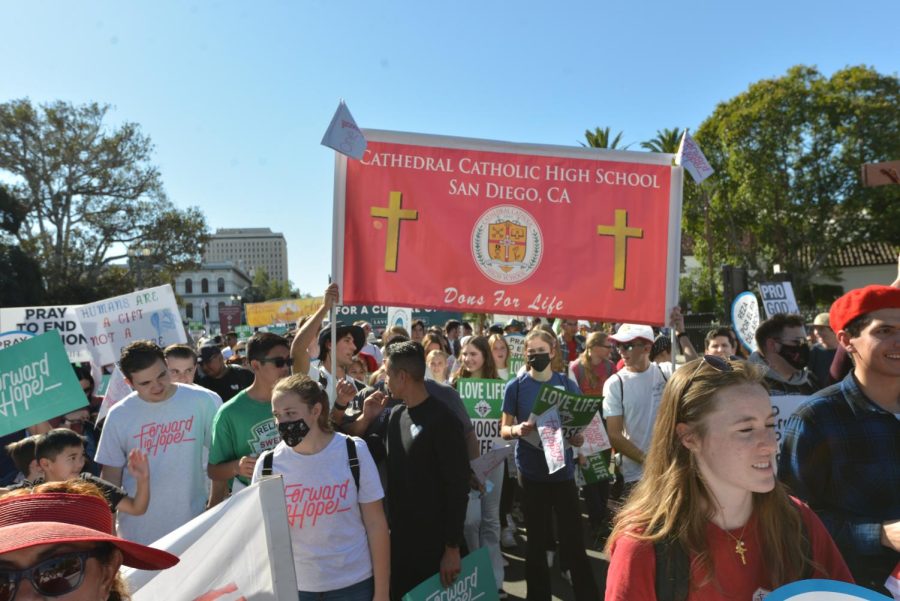 Dons For Life take on the One Life LA Walk. As thy hold up their signs, they walk in to show their support in stopping abortion from taking place.

on Saturday, January 22nd, high school students took their beliefs and faith up to Los Angeles, California to take part in the annual One Life LA Walk where they hoped their voices would be heard.

20 students and staff from the Dons For Life Club of Cathedral Catholic High School took a day trip to partake in a pro-life rally. The walkers ranged from toddlers to adults that sought to preach their stance on the controversial topic of abortion.

The 2022 One Life LA March for Life marks the 8th year of this tradition, where people march to show their support on their pro-life beliefs.

Here at CCHS, Dons For Life has been a club since the school years of 2016/2017 and from then on, they have participated in a yearly March for life.

LaPorte shared about how January 2020, the last year DFL participated in a march, led up to the “moments before everything was different forever.” This situation that left everyone around the world in shambles brought about a halt in Don’s For Life’s plans, as the following year of 2021 came up empty handed with no march planned in the US.

Despite LA not being the next intended destination of the four year rotation, Dons For Life chose to take on the adventure by only needing to take a bus ride to reach the One Life LA march. The leaders of Dons For Life chose a bus ride over a plane ride across the country to DC as a precaution to help stay safe against the raging pandemic still occurring today.

“Going to these walks is foundational for Dons For Life,” LaPorte states. Dons For Life has attended a march every year that they could since the start of the club in 2016, along with the leader Laporte.

The march consisted of the actual walk from Olvera St. to Spring St. where walkers proudly recited the rosary together. On the walk, they also faced pro-choice people raising oppositions to their ideals and beliefs on the sidelines.

During the march, public speakers made their appearances and spoke on the topic about abortions with their opinions. The speakers consisted of Gloria Purvis, Sister Bethany Madonna, Ed Shoener, Mari Pablo, Sister Norma Pimentel, Christopher Duffley, and Karyme Lozano.

The day ended with a mass orchestrated by Archbishop Gomez in the LA Cathedral of Our Lady of Angels. At the mass, candles were lit to represent the lives of the unborn that were lost that day in LA.