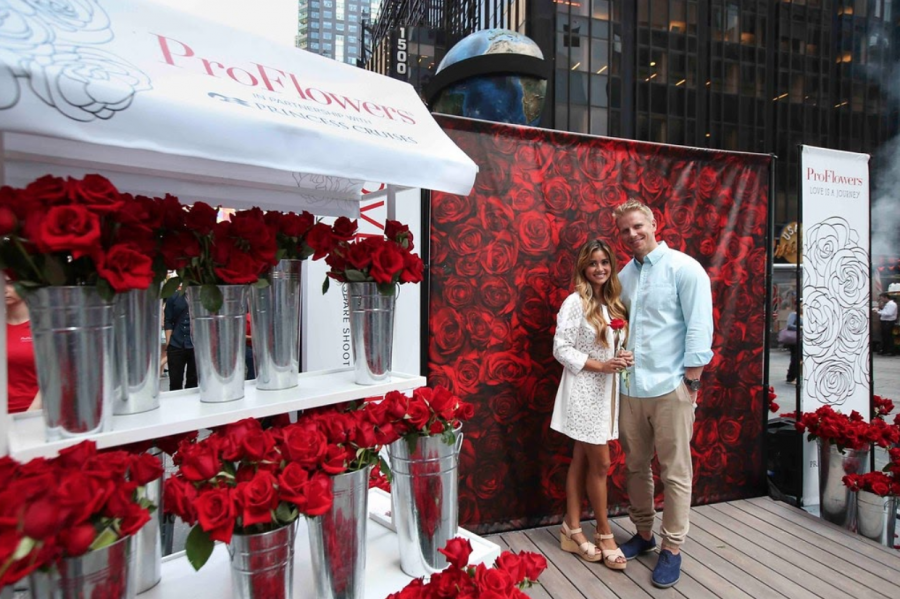 The Bachelor contestant Sean Lowe poses with his wife Catherine Giudici, who he met on The Bachelorette.

Since it’s premiere in January of 2020, The Bachelor, a reality TV dating game, is continuing to engross Cathedral Catholic High School students, creating buzz and tension between them regarding its romantic outcome.

With The Bachelor currently airing on Hulu and other streaming platforms, CCHS students are debating and making predictions about the popular show.

“I’ve been watching The Bachelor since I was in middle school,” CCHS student Delaney Fritz ‘20 said. “My friends and I all watch the show and oftentimes we argue about which girls we like and dislike, and who we think should end up with that season’s bachelor.”

However, while entertaining, The Bachelor and reality shows like it contribute to society’s objectification of women and work to trivialize the traditional social pillar of marriage.

According to Fox News, last year’s Bachelor finale racked up approximately 7.5 million total viewers, a number that does not factor in viewers of the episode who watched it on streaming services after it aired.

Additionally, a study conducted by TV By the Numbers shows that Keeping Up with the Kardashians, Real Housewives programs and 90 Day Fiancé consistently rank with in the top 10 most-viewed cable shows among adults ages 18-49 on Sunday nights.

Ironically, most reality TV shows are typically marketed to women, despite the fact that women are consistently objectified throughout them, being used as tools to give shows sex appeal and drama.

For example, The Bachelor 2020 features 30 women competing against each other to win the affections of one man. By pitting women against each other, Bachelor producers create entertaining tension and romantic drama viewers devour.

But this type of entertainment comes at a price.

In a traditional courtship scenario, a woman can expect the man she is dating to be faithful to her. However, The Bachelor turns this societal norm on its head. Instead, the bachelor simultaneously courts and has relations with 30 women at once, to see which one he likes best, reminiscent of the way a person would test drive a car or sample food.

In short, the show’s producers and the bachelor treat women as disposable objects.

Unfortunately, this is a common theme in reality TV, which begs the question: why do women still watch?

Much of reality TV’s appeal comes from the guilty satisfaction of seeing someone at their worst. Watching a woman be heartbroken, be in a cat fight with her friends, or deal with a catastrophe allows many women to look at their own lives with a new sense of appreciation. It boosts their confidence, and it assures them they must be doing something right.

But this mentality is unhealthy, and it continues to be fed to women by reality TV producers, looking to use someone’s pain or drama to turn a profit. In order to eliminate the misogyny and objectification perpetrated by reality TV, women must stop acting as its primary consumers.

But women are beginning to turn away from reality TV.

A  2019 Hollywood Reporter survey shows that while U.S. adults continue to watch reality programming, their feelings on the genre continue to deteriorate, with women in particular possessing unfavorable views of certain shows explicitly marketed to them. 48% of the poll’s 2,200 respondents stated they have an unfavorable view of reality television.

Moreover, in addition to perpetuating misogyny, The Bachelor and reality TV shows like it are deconstructing millennials’ and teenagers’ ideas of marriage, painting the once cherished union as trivial and unnecessary.

In fact, only two-thirds of Bachelor seasons end with proposals. Out of those proposals, only 5 have led to marriage, with The Bachelorette having a better success rate at 30% and The Bachelor at 11%.

While reality TV is not the direct cause for changing views on marriage and declining marriage rates, its cultural impact cannot be ignored. With so many young people tuning in to reality TV, the shows can shape their worldview and their ideas about love and marriage.

According to the Pew Research Center, in the U.S., cohabitation is on the rise while marriage rates continue to decline. About 50% of U.S. adults today are married, a statistic down 9% since its peak of 72% in 1960, according to the U.S. Census Bureau.

These statistics indicate millennials and upcoming generations are continuing to stray further away from marriage, and media like reality TV could be an influencer in that decision.

While some people argue that shows like The Bachelor are created for entertainment purposes and should not be taken seriously, they should consider the fact that the show, in addition to perpetuating misogyny on screen, continues to face allegations of harassment against women offscreen.

Last summer, production on Bachelor in Paradise was suspended briefly after allegations of misconduct related to a sexual encounter, while in October, a former producer filed a lawsuit against the show alleging she was sexually harassed while working on the program.

Ultimately, while intended for entertainment, reality TV portrays women and marriage in a negative light, proving harmful to viewers and to society.