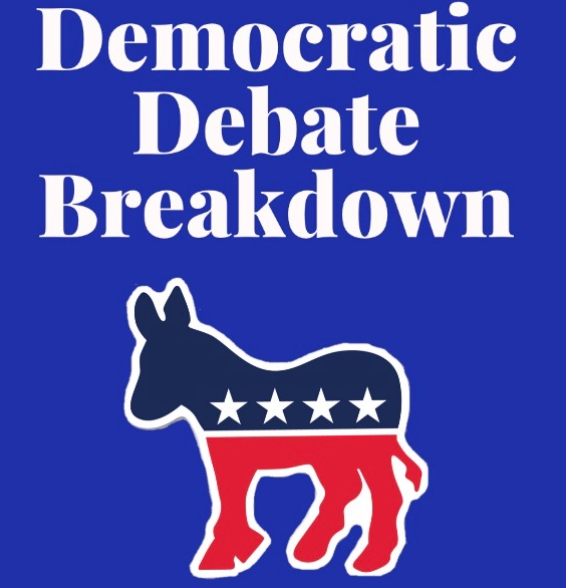 With new front-runner Sen. Elizabeth Warren, D-Mass, living much of the night on defense, and the middle-of-the-pack candidates making as many attempts to be unique and unforgettable as possible, a see-saw of shifts between attacking President Donald Trump and addressing policies occurred.
The new recruits
Steyer is running on his longtime antagonism of President Trump, as he has called for impeachment for more than two years now. Due to this, Steyer started strong in addressing the current impeachment debate.

Despite being a billionaire, Steyer piggybacked on Sen. Bernie Sanders, I-Vt., and his demonizing of wealth, yet came off as pragmatic and considerate, as he recognized the importance of larger taxes on him and his rich counterparts.

Eloquent and practiced, Steyer knew where the cameras were, as he engaged eye contact with viewers at home rather than the in-room audience and moderators.

Gabbard echoed fellow candidate and attorney Andrew Yang’s universal basic income, defended herself against “smears” from CNN and the New York Times after declaring her candidacy, and as an Iraq war veteran, unsurprisingly did not back down in her foreign policy beliefs.

Although Gabbard has debated before, she could not attend the September debate due to a failure to meet the campaign prerequisites.

Both of these candidates could reap an increase in their base due to there exposure from the debate and the youthfulness of their campaigns.
The front-runners
Sen. Elizabeth Warren, D-Mass, fostering an identity of being meticulous and well-read, was attacked on Medicare for all due to its involuntary nature and its financing. This initial attack was amplified by the reputation Warren tries to withhold of always having a plan.

Attacks continued on Warren as Sen. Amy Klobuchar, D-Minn, gave her a “reality check” that “everyone wants to tax billionaires,” and former Rep. Beto O’Rourke, D-Texas, condemned her approach to addressing problems by pinning blame rather than raising others up.

One repercussion of the constant criticism of Warren was the large fraction of the three hours Warren got to speak due to the added response times, benefitting the expert debater in some respects.

Sanders won on healthcare, as he villainized Obamacare while former Vice President Joe Biden stood parallel to him, and challenged the Democratic Party to have “the guts” to stand up to the healthcare and pharmaceutical industry.

Sanders quickly followed his passionate healthcare tangent with his resolute push to eliminate billionaires. The self-identified socialist, had no difficulty voicing his frustration with the top one percent and his willingness to fiscally redistribute wealth.

With witty comments throughout the night, Sanders seemed sharp as ever, a necessary sign for voters after the worry of Sanders’ health following his recent heart attack.

Biden came off strong on the danger of a re-election of President Trump from a foreign policy standpoint, stating, “there will be no NATO” if he is re-elected due to his devaluing of allies.

Biden, however, remains in the top tier of candidates for one clear reason: integrity. Despite struggles on a debate stage with stutters and stammers, Biden appears good-intentioned and his honest reputation shines through.

When Warren took a low shot at Biden and refused to mention Biden’s name in giving credit for boosting her consumer agency bill, Biden went high.

“You did a hell of a job at your job,” Biden said to Warren in response to her low blow.

“I would say to John, ‘you didn’t see a war you never wanted to fight’,” Biden said, “and he would say to me, ‘you didn’t see a problem you never wanted to solve.’”
The middle-of-the-pack
South Bend, Indiana Mayor Pete Buttigieg entered with the theme of addressing the polarization after Trump exits office. Recognizing that political problems will not cease when President Trump leaves, and emphasizing the importance of not radicalizing all policies and being practical and moderate, Buttigieg may be the biggest winner from last night.

Maybe the best back and forth of the night came between the two veterans, Buttigieg and Gabbard on the Syrian conflict and endless wars, as Gabbard initially displayed her passion on the topic, however, was upstaged by Buttigieg’s passionate disgust with Trump’s betrayal of “American values,” and leaving America’s “credibility in tatters.”

“When we abandon the international stage,” Buttigieg said, “when we think our only choices are between endless war or total isolation, the consequence is the disappearance of US leadership from the world stage.”

After having the most memorable moment of the previous debate in his strict position on gun control, O’Rourke seemed to fade on the large stage, and unable to produce another demonstrative moment. Praised for his handling of the San Antonio shooting in the last debate, O’Rourke received an opposite sentiment from his contemporaries last night, as he was exposed for lacking methods of execution of his mandatory buy-back gun control program.

Buttigieg and O’Rourke had a replayable back-and-forth regarding the buy-back program, which Buttigieg seemed to come out victorious of due to him getting the last word, and appearing more rational on the matter.

Sen. Kamala Harris, D-Calif, undergoing a steady decline in the polls since her loud and impressive opposition of the heavyweight in Biden in the first debate, spent another debate in the background, seeming to attack the wrong aspects of her contemporaries, such as Warren not calling for the end of Trump’s twitter

Though his base will likely not grow from last night, Sen. Cory Booker, D-N.J., acted as debate peacekeeper without feeling too romantic, as he protected Biden from criticism stemming from the Ukraine situation, stating, “[President] Trump elevated a lie,” and “[Biden] should not have to defend himself.” Additionally, Booker acknowledged the dangers of tearing down one another and voiced unifying sentiments regarding the precedent of allowing the democratic candidate to escape the debates and enter the general with a worn down reputation.
Final thought
The final question regarding a “surprising friendship” each candidate has had appropriately concluded a night of tension and argument. Even more appropriately, the response a majority of the candidates took was one President Trump would likely scoff at: a friendship across the aisle.