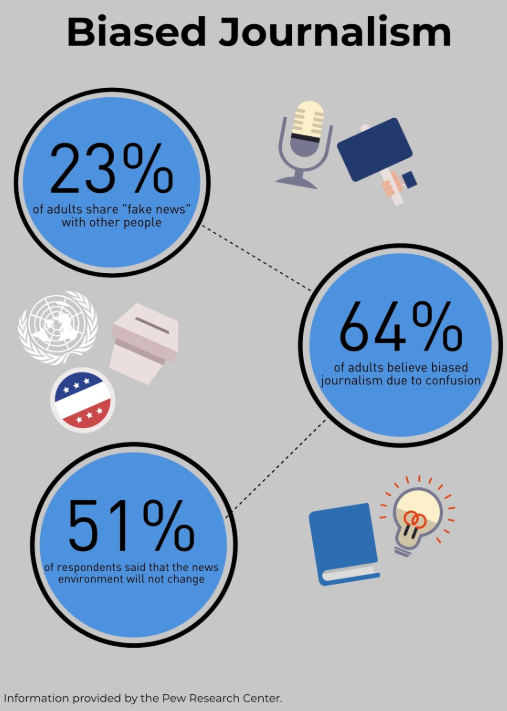 A poll taken by the Pew Research Center determines what viewers think about opinionated journalism.

The duties of journalists have been modified and used as a stepping stone to sway opinions among Americans, thus causing confusion and division.

Journalists have played a major role in American society since its inception by informing the public of current events. Recently, social media and major broadcasting stations have muddied the waters by influencing viewers’ minds and opinions as they tune into news stations seeking factual information needed to form their own opinions.

However, news seekers too often consume information from biased journalists giving one-sided opinions, thus threatening the existences of U.S. democracy and soiling the reputation of the profession and fourth branch of government.

“[Watching major broadcasting news] has come to the point for me where I don’t watch those shows anymore because they are completely biased, at least in my opinion,” Cathedral Catholic High School alumna and current journalism student at the University of Missouri Miss Micaela Dea ’15 said. “That just goes with what type of journalism it is. There are so many types that you don’t even need a degree to perform it.

“You can do blogs and social media, but that journalism is opinionated, and people are confusing it with local news and storytelling.”

Miss Dea believes major news stations such as CNN, Fox News, and many more have become increasingly opinionated, rather than unbiased when discussing facts viewers should hear and know.

“Everything is being put under the same roof as fake news, and it really hurts,” Miss Dea said. “I do believe [major broadcasting stations] are biased, but it hurts to see that [the fake news term] is also being swayed toward local news, which in my opinion, is not biased at all.”

“Most journalism now is not really journalism, and it’s all mainly documentary, which almost always has bias to it,” Mr. Andrzejewski said. “It’s heavily based upon people who are trying to build their own audience through Twitter, Instagram, Snapchat, and they’ll look at what their audience wants and sway that way.”

Mr. Andrzejewski describes some journalists as people who base their content on what their viewers want to hear rather than the facts. He feels most journalism nowadays should not be considered “real journalism” because of the level of opinions in the content.

“You don’t really have, in a traditional sense, a non-bias journalistic platform now,” Mr. Andrzejewski said. “You have people who are building an audience, creating separation and division through what is now an element of entertainment, and not an educated news sector.”

Viewers might argue hearing the opinion of journalists allows them to hear a different opinion, therefore offering them a variety of valid viewpoints.

Mrs. Kathleen Bade, a Fox 5 news anchor, argues journalists have a duty and professional responsibility to provide necessary facts about current events and nothing more.

Mrs. Bade believes viewers must exercise caution when absorbing television and print news. News consumers must ask themselves if a comment is fact or opinion when obtaining information via news outlets.

“The Fox 5 news director has cautioned us to make sure we keep our role as an unbiased and balanced news outlet,” Mrs. Bade said. “This includes keeping anchor remarks to a minimum and that, regardless of the story, our delivery should be in the same neutral tone.”

Bade’s boss also continuously reminds reporters and staff that local news is now more trusted than national and cable news because local news stations are not in the opinion news game, she said.

Journalists have confused viewers about the purpose of journalism in a democracy, as well as journalists’ roles in society. In the final analysis, journalists are not meant to provide any commentary or opinions that alter the facts in the viewers’ minds.

“I believe we have entered a time when people have difficulty differentiating between factual news and opinion news,” Mrs. Bade said. “The latter has blurred the lines. People aren’t discerning journalists from television hosts, and there is a stark difference. Taking in someone’s interpretation of the facts, as opposed to the facts themselves, are very different sets of information.”

At this point in American society, viewers cannot rely on the honesty and accuracy of the news they consume. Viewers must decipher facts from opinions and truths from lies, which is something viewers should not have to do as it is rightfully the responsibility of news outlets.

“We’ve now reached a time when people presume the facts you broadcast are biased if it doesn’t match what an opinion news host has reported,” Mrs. Bade said. “[Fake news] has placed more responsibility on the viewer to seek more than one outlet for their news, which is something I personally do and recommend everyone do, to understand all sides and what audiences are hearing.”

According to Mrs. Bade, viewers now are forced into fact-checking the news they are viewing because it is simply not reliable or completely factual. The job of a journalist is to give factual information to viewers, leaving all opinions aside. Some journalists nowadays have forgotten that their true position is to inform and not to cause division.

“I have always said, ‘I’m not paid to have an opinion,’ ” Mrs. Bade said. “I believe commentary isn’t my role. That said, I do believe it’s my role to give a story context, fact check, and make sure it’s balanced so the viewer can form their own opinion. That’s our job. Present the facts so ultimately the citizen can determine how they feel about issues and elected officials and can choose how they want to react to them.

“We are the eyes and ears of the people.”