Helping should be native to Americans 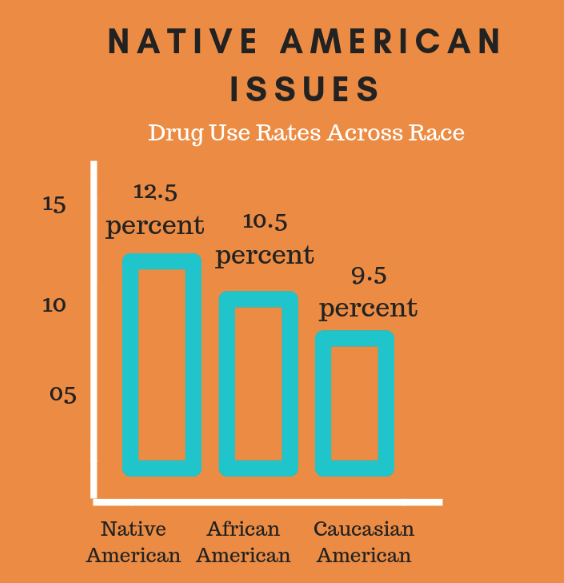 Many Native American communities today struggle with high illicit drug use compared to other races. Information provided by The Sunrise House, an American Addiction Center facility.

Cathedral Catholic High School student Autumncloud Taylor ‘21 has continued in the footsteps of her brother Nighteagle Taylor ‘15 by re-establishing the Native Indian club, a group focused on bringing Native Indian culture to the CCHS campus.

“I wanted to continue my brother’s club because I thought it would be a great thing to bring to the CCHS community and a great opportunity to teach students about our culture through American Indian trivia and traditional games,” Autumncloud Taylor said. “We would also like to have guest speakers to further explain the [American Indian] culture and bring more awareness.”

Although Autumncloud Taylor puts an effort to bring awareness to Native American culture at CCHS, a predominantly Caucasian school, the U.S. gives insufficient attention to the Native American heritage and the obstacles they face on a daily basis. Americans should take time to focus on the issues facing Native Americans that have gone overlooked and be aware of the lack of proper assistance Native Americans receive from the U.S. government.

Autumncloud Taylor, close to her native roots, grew up on the Santa Ysabel reservation for the first five years of her life, while living close to relatives of native ancestry. She hopes reviving the Native Indian Club on campus will make students more understanding of American Indians’ role in society and history.

“I wish that people knew the foundation of Native American culture, because hardly anybody knows anything about it,” Autumncloud Taylor said. “There is much more to be learned about their way of life before colonists came, and it’s very important to learn about their modern culture as well. We [American Indians] are still a part of society, and people tend to forget that.”

The federal government currently recognizes 573 Native American tribes and Alaska Native tribes, which face high levels of poverty, imprisonment, and drug abuse. Autumncloud Taylor is aware of the hardships that natives face today in the reservations.

A lack of proper government assistance plays a role in native poverty, as the Partnership with Native Americans recently criticized the U.S. Department of the Interior Indian Affairs (BIA) by calling it the “least effective government agency and the most mismanaged.”

The negligence of a government agency is unacceptable when the population of people it is supposed to represent and to care for is struggling at such high levels.

The Cherokee Observer Bureau of Indian Affairs recently stated that the BIA has a “culture of corruption and institutional incompetence that runs so deep that any attempt at reform would be futile.”

The mistakes, however, do not rest only on the BIA.

The lack of proper government assistance has led to difficult and desolate life in reservations. With no signs of  progress and a better future, many American Indians are subject to drug abuse and improper living conditions.

“There is a subconscious idea natives have in the back of their heads that the government put us in these tribes so we are stuck there, so a lot of Indians end up staying and developing toxic habits,” Autumncloud Taylor said. “Many feel stuck in their circumstances, but they also don’t want to leave.”

The Sunrise House, an American Addiction Center facility, states Native Americans living in reservations are more severely affected by the use of drugs than natives living in outside areas. The abuse of drugs is due to the isolationism, poverty, and a lack of healthcare services.

At the root of these problems— increasing poverty and illicit drug use— is the lack of outcry from the public to help Native Americans. Americans need to be aware of the natives’ struggles as it is the key to their advancement in society. The push of people in the nation would encourage the government to make changes in the BIA and to stop the cycle of poverty and drug abuse.

The public needs to influence government action to properly implement money into programs that will help Native Americans. We have the obligation to use our voices for groups of people who need our help. As said by the Lone Man from a Native American legend:

“I have seen that in any great undertaking it is not enough for a man to depend simply upon himself.”