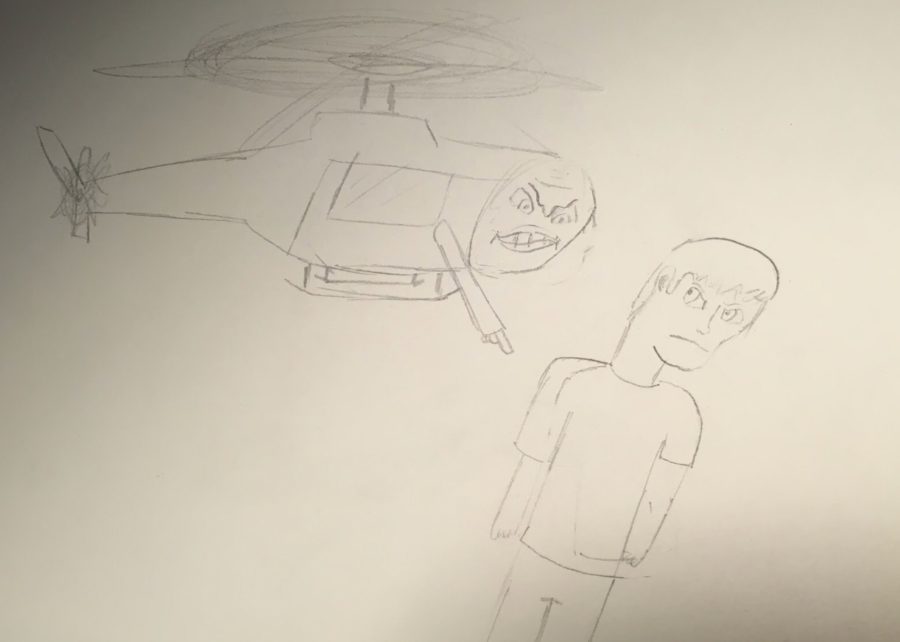 Comic by Will Boyer

Cathedral Catholic High School student Carly Duenas ‘19 knows all too well about the constant eye her parents keep on her through Life 360, an app that alerts parents of the whereabouts and driving habits of their kids.

“My parents started using [Life 360] when I was in 7th grade,” Duenas said. “I do feel it is an invasion of privacy when they use it because I feel if they just asked me where I was I would tell them, but when they use [Life 360] it feels like they don’t trust me or they assume I’m going to lie.”

Life 360 is a family location-sharing app aimed at keeping families aware of each others’ whereabouts via notifications regarding current location and driving routes for each family member, avoiding the hassle of phone calls, according to Life360.com.

The app contributes to the new digital aspect of helicopter parenting, or obsessive parenting, which refers to parents that hover over every aspect of their child’s life, hoping to curb any possible hindrance. However, the obsessive watching ends up preventing kids from becoming independent.

According to an El Cid Instagram poll of approximately 200 students, 44 percent of CCHS students have Life 360 and similar apps installed on their phones.

“At first, [Life 360] felt like a huge invasion of privacy,” Lauren Alberton ‘19 said. “At this point I’m indifferent to it and don’t have to worry about texting my mom when I get somewhere safely because the app tells her.”

Parents should be concerned for the safety and wellbeing of their children, but obsessive parenting stifles youth independency and stimulates anxiety.

Middle-class suburban neighborhoods are breeding grounds for excessive parenting, where parents often feel that their children are entitled to certain benefits regarding school, extracurriculars, and more. Millennials and GenZ, those born between 1995 and the present, are the only generations to be parented this way, so the long-term effects of prolific helicopter parenting have not begun to fully surface yet.

Parents who take charge in every aspect of a child’s life cause their kids to develop learned-helplessness, a condition that induces anxiety in children when they have to take control of their life when their parents are absent. This condition only worsens when parents continue to overstep their boundaries.

Children with helicopter parents are likely to have depression and anxiety disorders, according to CCHS psychology teacher Mr. Francis Caro.

“At Mira Costa College there has been an increase in phone calls from parents who have kids failing classes,” Mr. Caro said. “This does not look good, and it is not something parents should facilitate.”

In these cases, years of parental overprotection and hovering is to blame, not the child. By calling the professor, the parent only increases the helplessness his or her child feels.

Parents who use Life 360 augment a relationship of distrust with their kids since the app usage implies that their children are not safe without their constant presence.

“[With Life 360], a parent’s intention may be safety, but they may be defeating the purpose and causing more rebellion,” licensed marriage and family therapist Mrs. Anna Williams said.

By using the invasive tracking apps, parents send out the message to their child that he or she is not capable of living without constant interference from his or her parents. If a teenager is out late and not responding to his or her parents, they tend to jump to conclusions about what is happening. Chances are that the teenager is safe and just not looking at his or her phone, Mr. Caro said.

The satirical British drama Black Mirror released an episode in 2017 entitled “Arkangel” to dramatize the effects of helicopter parenting. In this episode, the mother implants Arkangel, a neural implant that allows parents to see through their child’s eyes via tablet to ensure the child’s safety. In turn, her daughter is censored from what her mom considers harmful. In the end, the daughter runs away to start a new life, free from the constant eye and judgment of her mom.

While exaggerated, “Arkangel” depicts the distrusting, hostile, and harmful relationships helicopter parenting induces. The censorship of violence and other adult topics only further prompted the daughter to seek them out.

In order to circumvent this negative parent-child relationship, communication must play a key role early on.

“When it comes to parenting teens, we have started to move away from ‘rewards and consequences’ to a more communicative and understanding style of parenting,” Mrs. Williams said.

Parents should establish this healthy relationship by listening to their child, engaging in their child’s extracurriculars, spending time with their child, and being wary of falling grades and changes of mood, Mrs. Williams said.

“Part of the maturation process is making mistakes and learning from them,” Mrs. Williams said. “An important part of parenting is teaching your children how to take care of themselves and to be good decision makers.”

Life 360 prohibits kids from making mistakes, which are crucial in childhood development. If a child does not make mistakes, how will he or she learn what to do in certain situations?

Parents who trust their kids receive the reward of seeing them blossom into self-efficacious, empowered young adults.