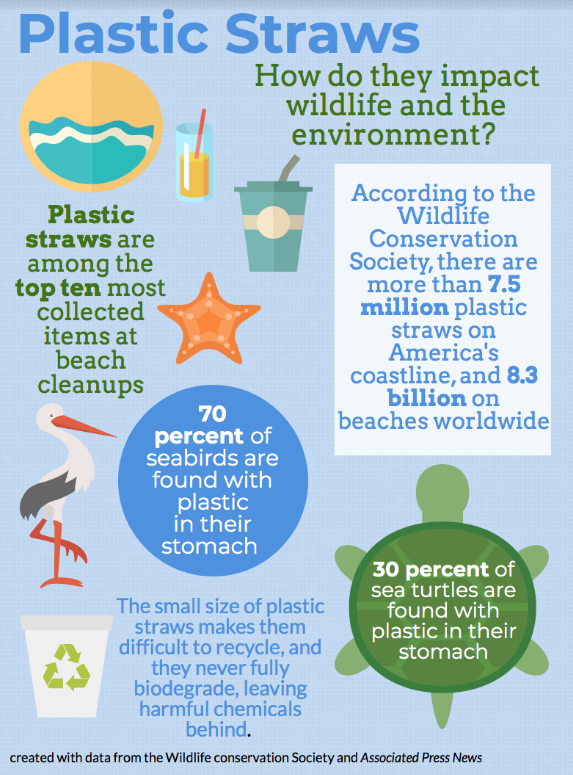 Legislation prohibiting dine-in restaurants from offering plastic straws to guests was signed recently by Gov. Jerry Brown, establishing California as the first state to ban straws and igniting a controversial debate about the harmful impact straws wreak on the environment.

The straw debate began when a YouTube video of a sea turtle with a plastic straw embedded in its nose surfaced online, ultimately going viral and leading to the trending anti-plastic straw hashtag  #stopsucking on Instagram and Twitter. Despite increasing evidence illustrating the negative impacts plastic straws create for the ocean and its wildlife, many people continue to argue against a potential straw ban.

However, plastic straws are a single-use product of convenience, and banning them is the first entry point in tackling plastic pollution, especially in the planet’s oceans.

A ban will allow plastic straws to act as a gateway plastic, leading consumers to forgo additional single-use plastic items such as plastic bags and cups, subsequently increasing the quality of our environment by reducing the ocean’s pollution and toxins.

“It’s such a small change people can make in their daily routines, but it heavily impacts the environment, and (it) will help us to decrease plastic pollution in the long-term,” Cathedral Catholic High School environmental club leader Helene Boggs ‘20 said.

According to an estimate from the National Park Service, humans use more than 500 million straws daily, enough plastic to circle the earth twice. Due to their small size and polypropylene make, plastic straws often cannot be recycled, and they take more than 200 years to decompose.

The 11th most commonly found ocean trash, plastic straws significantly contribute to the 1 million seabirds and 100,000 marine mammals that die each year  from plastic consumption.

“There is plenty of observational evidence of the mass of plastic in the oceans, and it’s negative impacts on wildlife and on marine ecology,” University of California, Berkeley professor of environmental science Mr. Ronald Amundson said.

“Plastic is a human made product that has few mechanisms of degradation,” Mr. Amundson. “The degradation by sunlight or physical processes only makes the plastic smaller and more likely to be consumed by an organism.”

Plastic straws never fully degrade. Instead, they break down into smaller pieces, releasing chemicals harmful to marine wildlife and to humans. Because they cannot biodegrade through the work of microorganisms, plastic straws will never be fully off the earth, according to a recent National Geographic report.

Motivating activists nationwide, emerging data highlighting environmentally damaging plastic straws has led many cities and companies to put in effect or to announce a straw ban.

Starbucks, Disney, American Airlines, and SeaWorld recently announced they would be phasing straws out of their companies by 2020. Seattle, Washington was the first city to institute a straws-upon-request policy in July, 2018. Malibu, Oakland, and Berkeley are expected to follow.

“We’re convinced we need convenience, but people will adjust.”

Regardless of the environment, activists opposed to the plastic straw ban are raising concerns about people with disabilities, such as autism and multiple sclerosis, who depend on plastic straws to safely consume liquids.

However, silicon straws are a viable alternative for the disabled because of their flexibility and durability. Reusable silicon straws received a five-star rating from Karin Willison, who suffers from cerebral palsy and works as a disability editor at digital health community The Mighty.

The California straws-upon-request bill will be enacted in Jan. 2019. Under the state legislature, bill violations include a warning for first and second offenses, with subsequent infractions resulting in a $25 per day fine at a cap of $300, a small price to pay for vast environmental improvement.

“We only have one Earth and we need to show it the utmost respect and care,” Boggs said. “If we keep following the path that we are on, our plastic products will survive longer than we will.”