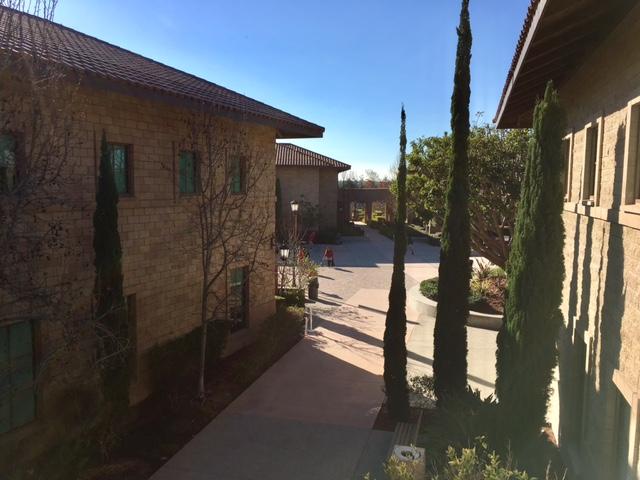 Though Southern California received a dousing of rain last week, the infamous San Diego sunshine still made its appearance.

Going into the visit, coordinator of the self study and CCHS Dean of Academics Mr. Jeff McMurtry aimed for authenticity.

“The most ideal scenario is not simply that we are accredited,” Mr. McMurtry said. “We want the study to be very authentic, which we feel like we did by having parents and students involved. We believe in the great things we have done, but it’s hard sometimes to notice the things we are not doing well.

“By listening to various voices and perspectives, we are able to locate our weaknesses and then grow from them.”

Accreditation, recognition of the credibility of an institution, is critical for the reputation and enrollment of a school. Moreover, the self study required in the accreditation process allows schools to examine themselves and consider areas for growth.

“It’s a school-improvement process,” chair of the visiting team Mr. John Anson said. “Jim Collins, in the book Good to Great, said, ‘You are never as good today as you can be tomorrow,’ and that is the whole philosophy behind the process.”

Involved in two previous CCHS accreditation visits, Mr. McMurtry labels past visits as ambitious as they sparked structural changes such as the addition of the iPads and of the seventh period.

During the 2018-2019 academic year, integral group meetings addressing subjects like organizational efficacy and student support occurred on early-dismissal school days. Selected students stayed after school to partake in these sessions alongside selected parents, faculty, and administrators.

“In our discussions we talked about what we do well,” said history and government teacher and member of the organizational efficacy integral group Mr. Greg Bobrinskoy, “but instead of just listing our accomplishments there was a real focus on ways we can strive to be even better.”

Mr. McMurtry and fellow administrators searched for items which sparked concern and labeled those as areas for growth, such as prioritization of wellness on campus.

According to Mr. McMurtry, wellness sprang up in dialogues throughout the different focus groups, which brought into question how departments outside of counseling can further emphasize it.

“The counselors should not be expected to be in charge of wellness,” Mr. McMurtry said. “They are not therapists, they are counselors. Teachers and deans should own wellness just as much as the counselors do and we should see how we can promote wellness in areas like scheduling or curriculum.”

Though locating the areas of growth happens during the group meetings, the all-school database aids in identifying weaknesses.

“The integral groups are the core of the self study,” Mr. McMurtry said. “But the biggest piece is the all-school database which took about two years to collect the information for.

“Collecting and analyzing are two different things, so we had the data and were able to turn our focus to what we do with [the data].”

The library is updated each year, allowing administration to look at trends and evaluate program choices. Conversely, areas recognized for lacking data are prioritized for future research.

The final report links the conclusions from meetings to data. CCHS then constructs an educational improvement plan to address potential structural changes and areas for growth.

“A growth mindset from the administration has been my experience since I began teaching here and I think it’s great for the school,” Mr. Bobrinskoy said.

Throughout the accreditation visit, visiting team members slide into classrooms and watch the different departments and teachers.

These classroom sit-ins are not evaluative of specific courses nor teachers, but according to Mr. Anson, are conducted to confirm the report’s claims and that a variety of teaching methods are exercised.

All six of the visiting team members are educators at separate high schools, so they know what to look for when accrediting, according to Mr. Anson.

“CCHS has such a robust selection of programs,” Mr. Anson said. “This element lends itself to making the school a great place to be.”

A 25-student group was gathered, which included hand-picked kids by administration and kids selected by the visiting team, according to Mr. Anson.

“What we learned from that group of kids,” Mr. Anson said, “was what a great group of young people attend [CCHS]. We could tell how the faith was fostered on campus because the kids talked about the teachers who would stay after class and they talked about their appreciation of teachers who support a kid who is having a bad day.

“Teens are not always receptive to the Catholic rules, but the faculty and staff here focuses more on the morals and love of the faith than those rules.”

The comfort level kids demonstrated on campus also impressed Mr. Anson and his team. Restorative discipline, which prioritizes dialogue and reflection as means of growth rather than punishment, complements each student’s comfort and leads teachers to be more understanding of student’s actions, according to Mr. Anson.

“It would be really easy for CCHS administration to decide to start coasting,” Mr. Anson said. “However, it is clear that Cathedral doesn’t think this way because the things that were in their action plan last time around were addressed along with many additional things.

“They are modeling for the students how we should always be trying to grow and to have that passion to be better each day.”

In completing thorough dialogues and plans for CCHS, administration is able to be on the same page.

“Five of eight of our leadership team members have been working four years or less in administration at this school,” Mr. McMurtry said. “One of the best things about the self study is how much this cadre of administrators got to really know their own institution by working so closely together.”

In the visiting team’s findings meetings, which concluded their visit, the visiting members praised the care fostered for each student and the welcoming nature of the diverse programs.

More importantly, the visiting team appreciated the authenticity on display.

“One thing that is hard for a school or person to do is to stop and look at oneself,” Mr. Anson said. “All six of us visiting team members admired how much work was put into transparency. I think that transparency really reflects the authenticity of the study. Everyone was very honest and willing to identify the weak spots so they could get better.