In an effort to address public safety, churches continue to heighten security procedures and explore the best methods of protecting congregations. 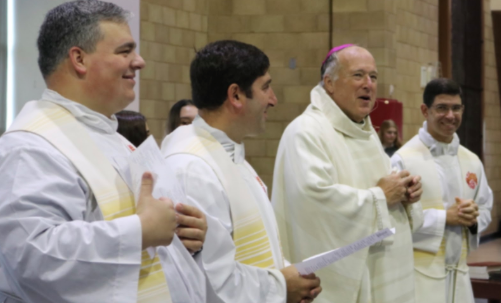 “It was disconcerting because I had to enter through a metal detector and comply with a bag check simply to attend Mass,” Nash said. “The ushers were plainclothes security personnel, and a uniformed antiterrorism unit was present.

“My family and I commented on how it was a shame that practicing our religion, a fundamental American freedom, could necessitate so much concern about the potential threat of domestic and foreign terrorism and violence.”

According to The Washington Post, more than 22 fatal church shootings have occurred on U.S. soil since 1999, indicating church massacres in the United States are on the rise.

However, the Center for Homicide Research, a national organization dedicated to recording homicides through statistical data, states the rate of violent incidents and fatalities at religious locations are potentially higher, since church organizations utilize varying criteria to record violence, often excluding mass shootings at non-Christian houses of worship.

In light of last year’s shootings at the Chabad of Poway synagogue in San Diego and the West Freeway Church of Christ in White Settlement, Texas, citizens continue to express concern to religious officials about the security of their churches.

In an effort to address security concerns, San Diego-area Catholic churches are reexamining the best method of protecting their congregations.

“We have security procedures in place, and they depend on the men and women who are the ushers for our various weekend Masses,” St. Therese of Carmel Catholic Church facilities manager Mr. Kevin Casey said. “We also have a different procedure in place for Masses that happen during Christmas and Easter when there are many more people who attend church.”

When developing security plans, many church leaders focus on raising awareness and on encouraging people to report suspicious activity.

“Our main priority is to keep the ushers educated about the number one technique…to be looking out your front door towards the people who are coming in,” Mr. Casey said. “Historically, ushers usually face the altar inside of the church, and that means that someone can come up behind them without them knowing they are there.

“So, at St. Therese of Carmel, we ask that at least two ushers out of the six supporting each Mass are in the vestibule at the front of the church with at least one of them looking outside constantly. The guideline is, if you see something that makes you uncomfortable, like a person carrying a large bag or something that looks like it could be a rifle container of some kind, to say something to the usher and call 911.”

While most local churches are heightening security measures, they are not considering arming security guards or featuring armed laity members in their security plans despite the fact that the White Settlement shooter was shot dead by an armed parishioner, who potentially saved dozens of lives with a concealed carry permit.

“I think there are lots of different opinions about having armed security guards,” Mr. Casey said. “Having the ushers become armed ushers, that’s not on our list. God smiles on us, and we haven’t had any problems with security yet, so we just continue praying.”

However, some local religious institutions, like The Rock Church, an evangelical megachurch in San Diego, which has hosted the San Diego Church Security Conference for nine consecutive years, has focused on church safety since its inception.

“It’s important for any organization to develop security plans because whether it’s parishioners at a church or teachers at a school, each employee has an ethical responsibility to keep people safe at their establishment,” said Mr. Morgan Ballis, director of strategic planning and training at the Campus Safety Alliance, a sponsor of the SDCSC.

Helping prepare churches, synagogues, and mosques with the tools to make their houses of worship as safe as possible, the conference takes place in June, and all religious denominations are invited to attend.

The conference’s main priority is protecting resources for risk assessments and asset management, minimizing civil liabilities, preparing the church for a safe worship service or large event, and protecting congregations.

“There are so many free resources including the Federal Emergency Management Agency and the Department of Homeland Security that offer free security outlines to get churches started,” Mr. Ballis said. “The biggest challenge churches face is leaning too heavily on current congregation members that have experience with law enforcement for security, and while those members are beneficial because they are so committed, ultimately a police officer is not an expert in security and hazard management.

“Churches need to focus on other hazards as well. [Churches] need to develop a balance between relying on internal members for security and bringing in outside consulting firms and paying for more experienced security.”