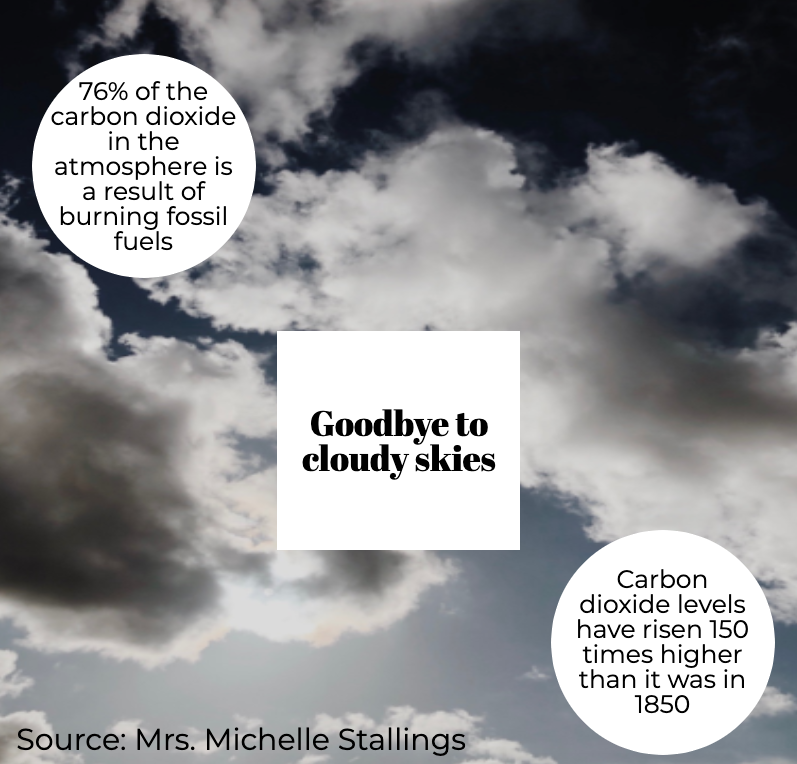 Humans, who are often noted as the most dangerous animals on earth, are living up to the label as studies show that greenhouse gases, which are gases that absorb carbon dioxide, speed global warming, causing clouds to be lifted higher into the atmosphere and the changing of many species and ecosystems.

When carbon builds up in the atmosphere, it breaks up clouds that keep the Earth at lower, livable temperatures. The eliminating of clouds will only speed up the global warming process and cause heat to be accumulated, therefore raising temperatures.

Clouds have the capacity to make major changes in the Earth’s climate, therefore affecting future generations. If clouds disappear, the climate could deteriorate.

“Clouds currently cover about two-thirds of the planet at any moment,” A World Without Cloud author Natalie Wolchover said in a recent interview on quantamagazine.org. “But computer simulations of clouds have begun to suggest that as the Earth warms, clouds become scarcer. With fewer white surfaces reflecting sunlight back to space, the Earth gets even warmer, leading to more cloud loss. This feedback loop causes warming to spiral out of control.”

Not only is climate change a serious issue around the world, it is also a major political discussion. Climate change is not an opinion-based topic, but a fact that is going to affect everyone.

“[Climate change] is real,” Cathedral Catholic High School environmental science and biology teacher Mrs. Michelle Stallings said. “I am blown away that there are people who see it as debatable. What a lot of people do not realize is there are only a handful of scientists — less than 3 percent — that are debating whether it is [human cause]. No one is debating that the climate is changing.

“Unfortunately [the climate change debate] has become a political agenda, so people feel the need to choose a side. There is no side or politics involved. It is science and there is plenty of data that supports and explains why the climate is changing.”

There are some natural factors that contribute to climate change, but humans have sped up the process, which must be slowed down in order to ensure a healthy future for earth.

“Carbon dioxide is released into the atmosphere naturally, but the levels have risen 150 times higher than it was in 1850,” Mrs. Stallings said. “I believe this correlates with the fact that we as humans are contributing to the levels at a much higher rate than nature is.”

Several of the main factors that are causing the speed up of global warming in the last 50 years have been cars, buildings, and factories, all of which are used on a daily basis throughout the world.

Because of the frequent use of cars and other energy sources, 76% of the carbon dioxide in the atmosphere is a result of burning fossil fuels. In order to slow down the burning of fossil fuels, funds must be allocated toward creating more renewable energy sources. Funding would also help to eliminate the internal combustion engines that many people use daily and work towards more eco-friendly machines.

Not only is global warming an overall severe issue, but the elimination of clouds can cause catastrophic changes for many species and ecosystems around the world, which will also negatively affect humans.

Ms. Kristen Houser, Futurism writer and author of Rising Clouds Could Spell Disaster for the World’s Tropical Forests, stated that cloud forests are dependent on clouds for their ecosystem, and the rise of clouds could cause issues for the tropical regions.

Houser claims that climate change will force clouds to be forced higher into the atmosphere, increasing the chances of the animal species in cloud forests environments to become extinct.

“If the global temperature rises just four degrees, enough to further limit the amount of clouds that form around the world, it would spell the destruction of the world’s coral reefs, massive loss of animal species,” Mr. Michael Mann, climatologist and geophysicist and director of the Earth System Science Center at Pennsylvania State University, said in an interview with Quanta.

The plausible changes to earth’s ecosystems likely to occur over the next century are daunting. This generation has seen the beauty of this planet, but might also be dooming the future of the animals and plants that live among them.

Professor of Environmental & Ocean Sciences at the University of San Diego, Dr. Drew Talley, discusses climate change in most of his classes, including statistics, where he has his students use data on climate change to learn about statistical analysis.

“[Climate Change] will require more public awareness here in the United States and abroad,” Dr. Talley said. “Many of the ‘sustainable’ things we buy are transported thousands of miles to get to us, and often from countries where the production of those things involves massive CO2 output, poor or unsafe working conditions, etc.”

Dangerous changes to the environment are coming fast if people don’t start by making changes to their own wasteful habits, and start working towards a better future for our planet.

“I think if we don’t start making changes soon, we will be dealing with the consequences of our changing climate which include more severe and frequent droughts,” Mrs. Stallings said, “a rise in the average global temperature, and sea level rise from thermal expansion of water molecules and melting glaciers. Thankfully our local cities already have climate change action plans in place to help us deal with the potential consequences.”