Dons for life walk for life 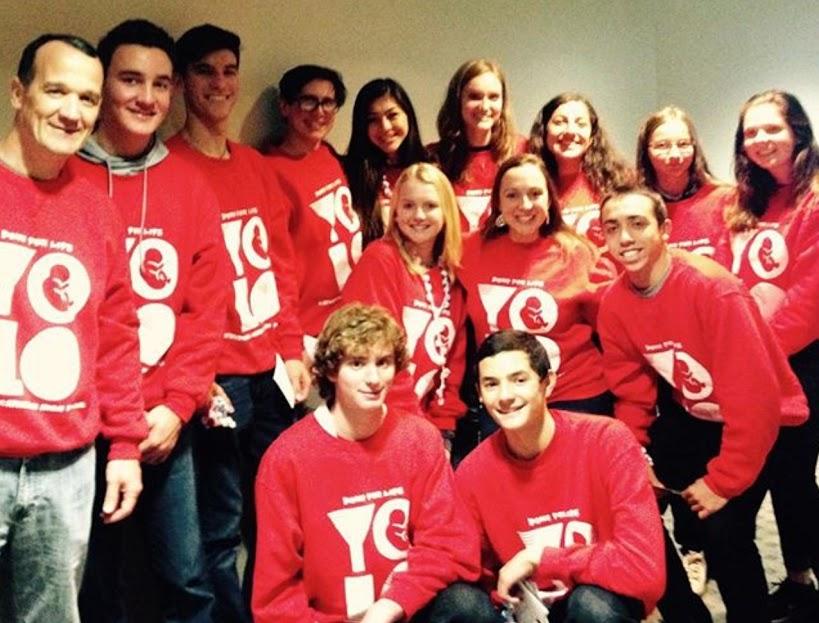 The Dons for Life club prepares for take off at the San Diego airport Saturday morning. They proudly wear their sweatshirts with the YOLO slogan, which stand for "You Only Live Once."

The Dons for Life club took a big step with the pro-life movement today by joining the Walk for Life West Coast event in the heart of San Francisco.

“As a Catholic school, we have to demonstrate we are pro-life,” Cathedral Catholic High School Principal Mr. Kevin Calkins said. “Clearly, one way you do that is to go and advocate for the unborn.”

Beginning at Saint Mary’s Cathedral in San Francisco, 12 students and two chaperones from the Dons for Life club will march for the pro-life movement. In addition, they will display a large red banner with the CCHS name and emblem, proclaiming Dons are pro-life supporters.

Yet, not everything is as easy as taking a walk.

“This issue can be very sensitive even on our campus,” Mr. Calkins said. “I feel like students would rather just get along than take a position.”

Students at CCHS often voice their opinions regarding reproductive rights issues. The debates get heated with many leading to unhappy endings. The turmoil can be hard to conquer, but CCHS student and Dons for Life member Emily Smedley ’18 is still attending the event as a pro-life supporter.

“In high school, being pro-choice is normal,” Smedley said. “Being pro-life is stigmatized with a negative connotation.”

To further the debate, many women believe men should not have a say in a woman’s choice. However, men will be joining thousands of women to debunk the stereotype that men have no voice regarding this issue.

Women frequently believe the saying “my body, my choice,” but CCHS math teacher Christine LaPorte believes otherwise. She even reaches out to CCHS boys to join in the movement and take action.

“A lot of people think pro-life is just a female movement, but it’s not,” Ms. LaPorte said.

Men and women do have different opinions and perspectives, and a woman’s right to abortion remains a controversial topic of debate, Mr. Calkins said.

Since men can be quick to leave a pregnant woman, Mr. Calkins pins the female’s choice on men who avoid the involvement of being present for his unborn child. With a toddler of his own, Mr. Calkins leads by example to demonstrate that men do have a place in a child’s life.

Mr. Calkins grew up in a single parent home raised only by his mother. Recounting his fond memories of the love his mother held for him growing up stirs emotions in Mr. Calkins’ voice.

Nevertheless, the message was clear to him — both parents should be present in a home and never abandon a child.

“Life is life,” Mr. Calkins said. “It’s not about who has more credibility or who has more of a right to have an opinion.”

While abortion is a major issue with every generation, the pro-life stance has a lot more to it than abortion, Mr. Calkins said. It is the movement for protecting the dignity of all human lives, from the unborn child to the inmate on death row.

The World Health Organization ran a statistic on 47,000 women dying worldwide from unsafe abortion complications, finding that 13 percent of maternal deaths are due to abortions. Further, Statistics Brain stated that the total number of death penalties since 1976 has been 1,392.

While the numbers are drastically different, the death penalty is still an issue. Statistic Brain reported 85 percent of counties in the U.S. have not had someone executed in 45 years.

The Walk for Life is trying to bring down the drastic statistics on abortion. Planned Parenthood is the largest contributor to abortions, according to the Heritage Foundation, a conservative Washington, D.C.-based think tank.

Birth Choice does quite the opposite.

Birth Choice provides resources for expecting families that need all the help they can get. Help ranges from finding a better job to providing  toiletries and parenting education. Birth Choice counters Planned Parenthood’s resources with the resource of a helping hand.

The pro-choice sentiment at CCHS will grow in the years to come, Ms. LaPorte said. She plans to lead more students on a Walk for Life by participating in future events in Los Angeles, Washington D.C., and San Diego.

Mr. Calkins, Ms. LaPorte, and Dons for Life welcome anyone to ask questions and join them on a walk for life.

“I’m standing firm by going,” Mr. Calkins said. “Sometimes what you do and don’t do is a statement within itself. I hope this is the beginning of an effort to be unapologetically and comprehensively pro-life.”