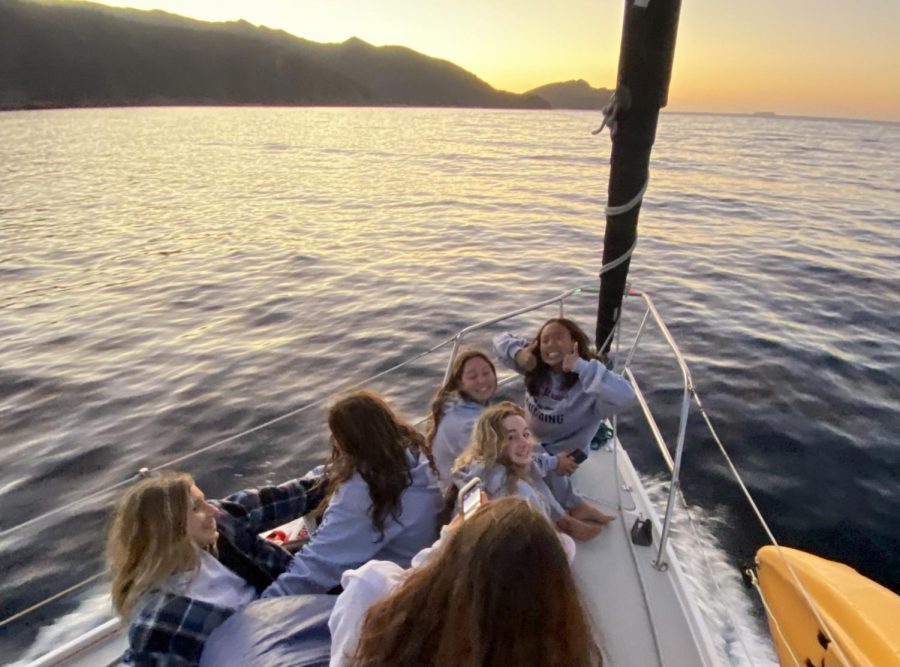 Hannah Wong sits at the peak of the boat with her teammates, oblivious to the tragedy ahead.

An event that had the potential to fulfill a once in a lifetime opportunity, instead fulfilled a nightmare like no other.

Six swimmers from Rancho San Dieguito Swim Club planned to relay twenty one miles through the Catalina Channel, one of whom is Cathedral Catholic High School’s Hannah Wong.

However, things did not go according to plan.

Her teammates felt Wong would be an asset to the relay, so when they scoured for recruits she was an obvious target. Wong jumped on this opportunity, reassured by the fond memories her brother shared from his swim in 2019.

Wong felt inspired by those surrounding her, “Two years before, my brother and his friends did the race and got me to want to do it. Plus, our main coach holds the world record for the Catalina race.”

However, the excitement was short-lived. A faulty pipeline leaked 126,000 gallons of oil into the waters between Huntington Beach and Newport Beach. This contaminated the waters the team planned to swim, forcing them to push the race date back.

Wong and her teammates trained for hours in preparation for the race, making the postponement all the more disappointing. Wong outlines their schedule: “Usually we swim two to three miles in the ocean for training. We also have normal practices where we build our endurance.”

The leak was not the only setback the team faced throughout their training period. One of the largest barriers that Wong highlights was the financial burden that was carried alongside their goals, “It costs $1400 to swim for federation and we had boat expenses and to pay the captain and the total came to $4000.”

The team brainstormed to raise the money themselves before the date of the race. They resorted to various fundraisers. Wong says, “One of them was my friend who has a lemon orchard and we picked about 800 pounds of lemons, donated it and got 800 dollars from that”. Then they turned to their community for help, “We also had a GoFundMe where we raised like $3000.”

This, on top of the oil spill, a hurt teammate, and anticipatory nerves, created a chaotic environment leading up to the race. Unfortunately, the chaos did not end here.

Wong paints the scene of the race day:

“We started around 9:30 pm and we were waiting on the boat for three hours for the waves to die down. Then, we headed to our starting spot past the main harbor. It took fifteen minutes to pass the safety of the island and that was when the wind, waves and swell started picking up. Our boat kept rocking back and forth to the point where the waves were crashing onto the boat. If we went underneath we would get sea sickness so we all stayed at the top. If you didn’t hold on to something at all times you would get flown into the water because of the rocking.”

The dangerous water conditions caused the boat official to lose track of the first swimmer as she ran her course. This is when they reconsidered whether it was safe to continue the race. The consensus was to cut it short.

The harsh waters proved to be an obstacle when getting the first swimmer out of the water, “Then there was a problem trying to get Nico back into the boat from the water… she almost died. When the boat rocked up [the swimmer] was right there and got sucked under the boat, but my coach thankfully was able to pull her up at the last minute.”

Once everyone was fastened as safe as possible in the boat, the boat headed toward land.

At the harbor at Catalina’s shore, the swimmers and their team did not find any relief, “We couldn’t go back on land after we got back to Two Harbors so we were on the boat for 16 hours.” She even recalls how the passengers packed together for the night, “We had food but it was a really small boat with 11 people on board and we had to sleep there.”

The following morning, the team was not surprised to face yet another obstacle, “We were stranded on the island for the whole day. Then the ferry that was supposed to take us back completely skipped our stop.”

The team could not escape the island, let alone escape the continuous conflict of what could be mistaken with a Netflix thriller.

Eventually, they made their way back to the mainland, but left their dreams and spirit back with the rocking boat.

Wong concludes, “I didn’t want to disappoint anyone after all the fund raising, but I think it was the best thing to do because it was too dangerous to continue.”