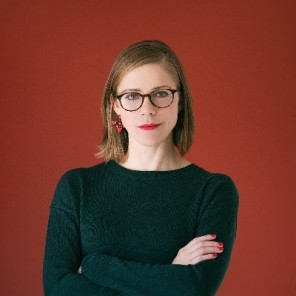 The subject of the email simply read “Molly.”

“I thought that I was in trouble,” Mrs. O’Toole said. “I thought maybe the Department of Homeland Security had finally gotten to my bosses and told them I was causing too much trouble.

“Eventually, I realized it was Pulitzer day, and I thought maybe there is a small chance in hell that we had won.”

As the first recipient in USDHS/CCHS history, Mrs. O’Toole won the first Pulitzer Prize for audio reporting for her reporting and interviews with U.S. asylum officers who had the job of sending immigrants back to dangerous situations, on the podcast episode “The Out Crowd,” of the podcast series This American Life.

Mrs. O’Toole shared the award with the staff of This American Life and freelancer Ms. Emily Green.

The U.S. border sprouted Mrs. O’Toole’s interest in journalism, so garnering a Pulitzer Prize for covering immigration to the United States was appropriate.

“Growing up in San Diego, I was always amazed that I could see Mexico from the hills in my neighborhood,” Mrs. O’Toole said. “We don’t always think of San Diego as a border city, but I was intrigued at a young age by how I was born on the other side of this arbitrary border and how different that made my life.”

While at USDHS, O’Toole recognized her affinity for writing and aspired to be an author. She concluded that authorship may be impractical for an early career and journalism was more realistic.

O’Toole jokes about her pragmatic judgment.

“Since I was in high school, the journalism industry has been hit so hard in so many ways that now it feels not remotely practical to get in the industry.”

“She had a spunky edge to her,” Mrs. Harmaning said. “I remember her being a very curious young lady which I always equated with intelligence. She was taking a difficult mix of courses while running cross country, yet I don’t remember a single complaint.

“I just remember her stick-to-itiveness, and I know that is what it takes, especially in investigative journalism.”

Despite fostering interest in journalism while in high school, Mrs. O’Toole could not partake in the school newspaper due to her demanding sports schedule.

“We were at the state meet and it absolutely poured rain,” Mr. Geiger said. “The course turned basically into a mud bog. For some people, that would dampen the experience because they had worked hard all season to get to that meet.

“But I remember Molly going through the race and afterwards, [her] thinking it was the absolute best thing in the world to be running in mud. She started doing mudslides thinking it was a blast.”

“I still joke about it with friends, but my real education in college was at the Cornell Daily Sun, the student newspaper that is independent from the university,” Mrs. O’Toole said. “I will always remember the first time going into the newsroom and seeing the beautiful chaos of writing and editing copy.

“Working as a young person and journalist in New York City was amazing, despite how hard it was,” Mrs. O’Toole said. “I got to work for some great places while at NYU, and had some amazing opportunities.”

In the following years, Mrs. O’Toole wrote for a variety of publications. She served as a campaign correspondent during the 2016 election, and then she freelanced.

“I felt like I was never going to be the foreign policy reporter that I wanted to be if I never spent substantial amounts of time reporting on U.S. foreign policy outside of the states,” Mrs. O’Toole said. “I finally took the leap and freelanced and went abroad for almost two years.

“I got to do the stories I always wanted to do, but that no one would send me to do unless I sent myself.”

“What keeps you going is each story and project you do, you are really interested in,” Mrs. O’Toole said.

“It is really unbelievable if you have experienced one side of the policies as I had done previously by reporting only in Washington,” Mrs. O’Toole said. “I don’t think you can measure the true impact of a U.S. policy until you are on the ground in that place and talking to those feeling the effects of the policy.”

Mrs. O’Toole and her partner knew freelancing abroad was temporary, so Mrs. O’Toole searched for jobs in the United States, and she discovered the opening at Los Angeles Times for immigration coverage.

“The LA Times didn’t necessarily want a political reporter,” Mrs. O’Toole said. “They wanted a policy reporter who would cover immigration and tell how it actually is across the U.S. and beyond the U.S.

“It was the perfect job.”

For Mrs. O’Toole, the transition to the Los Angeles Times felt like a homecoming.

In Dec. 2018, Mrs. O’Toole took interest in the President Donald Trump administration’s handling of legal immigration and the de facto refugee camps on the Mexican border.

“I developed a network of asylum officers, and I started including some of their testimony in my reporting,” Mrs. O’Toole said. “This American Life reached out, who I was already a very big fan of, and they explained how they were trying to get in touch with asylum officers and asked if I wanted to work with them.”

President Trump’s administration implemented the Remain in Mexico policy which altered the process for legal immigration.

Before the policy’s institution, asylum seekers who faced a risk of being killed or harmed if they returned to their home countries were given asylum. Later, they would be allowed to enter the United States and go before an immigration judge.

The Remain in Mexico policy, officially called Migrant Protection Protocols, MPP, contradicted U.S. asylum law as it sent people back to situations in Mexico where they could be harmed or killed, according to the asylum officer interviewees.

This American Life producers and Mrs. O’Toole built the recording from scratch, and tackled MPP from multiple angles.

“A producer and I went to the different asylum officers who wanted to participate,” Mrs. O’Toole said. “I learned so much about radio and audio just by watching the way they work and interview.”

The asylum officers were whistleblowers, and their requests for anonymity were challenging to meet due to the audio format.

“The asylum officers wanted to be a part of the recording, but they were still in the position of weighing giving up a career in federal government,” Mrs. O’Toole said. “They had families to support, but at the same time, felt ethically compromised by potentially sending people back to their deaths.”

Mrs. O’Toole forgot about the submission amidst the COVID-19 pandemic, until she received the email with the subject line “Molly” last week.

“It was in my wildest journalistic dreams that maybe before I die I might be a small footnote on a Pulitzer citation,” Mrs. O’Toole said. “And though there were years of work put in [to sharpen my craft.] I never thought it would happen so soon in my career.”

Mrs. O’Toole expresses shock over the award and checks the Pulitzer site daily to make sure there was not an error, or what she calls a “digital pinch yourself.”

“It is such a tough time in journalism right now with coronavirus and advertisers drying up completely,” Mrs. O’Toole said. “For me the award was a hopeful reaffirmation that journalism matters and that it matters now more than ever, and I’m hopeful that people will continue to support the industry.”