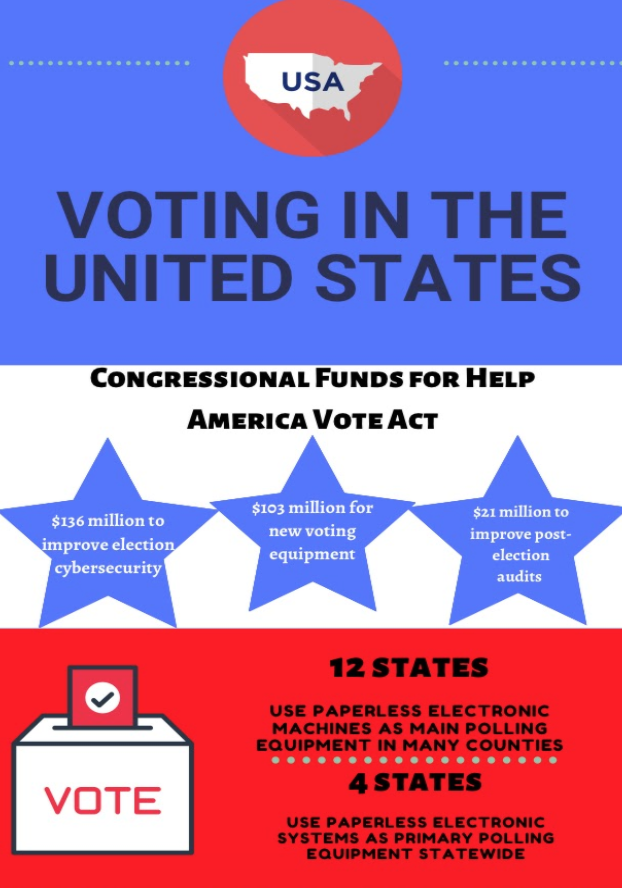 The integration of technology to improve the voting process has had a significant impact on the ways citizens vote, but the reliability of paper ballots remains recognized by many areas across the United States.

Cathedral Catholic High School student Ian Grooms ‘20 holds the responsibility of voting in high regard, and he looks forward to voicing his opinion for the first time in the upcoming 2020 presidential election.

“My one vote for a particular candidate or issue will help to determine the course of local, state, and national history,” Grooms said. “As well, I recognize that democracy is not universal. I therefore view voting as a solemn [civic] duty, a privilege which should not be overlooked or downplayed.”

Grooms recognizes the importance of every individual’s vote, the basis of the representative government in which he lives.

The election process is a sacred, safeguarded institution, and recent technological upgrades to the procedure have created a ruckus within this closely monitored event.

Recently, the integration of technology to improve the voting system and to provide a new method to make a citizen’s opinion heard has impacted the actual process of casting a ballot, sparking new issues concerning security, vote keeping, and the paper ballot’s future.

Grooms recognizes these potential problems, expressing misgivings about the integrity of the process, as a result preferring a handwritten ballot for this most important civic responsibility.

“Electronic voting machines have not demonstrated their long-term utility in a nation that has a long-standing tradition of democracy,” Grooms said.

Many citizens remain weary of electronic ballots, but their integration provides advantages for voters, ballot counters, and all people involved in the process.

According to Stanford University, the increased efficiency of electronic voting benefits both the voters and the government.

“Ideally, voters gain a better voting experience at the polls, are more confident that their vote will be correctly counted, and are able to vote more easily and efficiently,” Stanford researchers Gloria Lin and Nicole Espinoza write. “The government is potentially able to increase voter turnout, reduce costs, increase voter confidence, renew interest in the political system, and ensure the most democratic process possible.”

“Electronic poll books, which as of October 2019 are used by 41 states, including the District of Columbia, can reduce wait times for people to check-in to their polling locations,” NBC News says. “And as of January 2020, 38 states and D.C. offer online registration, making it easier for people to sign up to vote.”

The positive aspects of technology are evident, but many people share concerns with electronic ballots. Their most significant worry is having their vote properly counted during such a crucial process.

A recent malfunction during the Iowa Democratic Caucus Election has amplified wariness over voting electronically. Results were severely delayed after the primary voting app glitched and caused inconsistencies.

“The events are a stark reminder of just how dependent the U.S. electoral system remains on the proper functioning of software,” Forbes Media said. “The odd glitch here and there may be tolerable in a shopping or travel app, but failures in code can be disastrous for confidence in the outcome of elections.”

In the midst of this chaos, many people voiced great concern about the safety and reliability of electronic voting, including the worry over threats both foreign and domestic to the ballots and, therefore, the election results.

Due to these dangers, political parties are working to improve the security of election technology. The ultimate question is: are these precautions enough?

In August 2019, a number of skilled hackers attended the Voting Village at the DEFCON security conference and were tasked to infiltrate voting equipment presented to them.

“At the Voting Village, nestled in a ballroom in the sprawling Planet Hollywood convention center, hackers put the machines’ weaknesses on display with playful flourishes, overtaking one electronic poll boom to play the first person shooter game Doom on it, or leaving a Nyan Cat, a Japanese meme, sailing across the screen of another made by VR Systems,” The Washington Post said.

Nonetheless, a myriad of states continue to utilize the voting technology due to the benefits they provide in the election process.

According to research conducted by the Brennan Center for Justice, an estimated 16 million voters will vote using paperless equipment in the November 2020 election. They also state that a significant number of voters may not have paper records of their vote.

Unfortunately for these voters, areas that utilize paperless voting technology are still experiencing difficulty with their machinery, an issue not only limited to the United States.

The Dominican Republic was confronted with their own situation February 16th, when a municipal election was suspended due to problems with electronic voting systems.

ABC News reported that polling places which used these machines–about 50% of locations countrywide–witnessed issues with electronic ballots that stalled voting for about three hours. Many candidates were not appearing on electronic ballots.

“Such machines were used in 17 of the Caribbean country’s 158 municipalities and the capital—generally the most populous areas,” ABC stated.

No matter the place or the people, concerns about safety and proper vote keeping are prominent. While electronic ballots are efficient, many individuals question whether its benefits outweigh its risks.

“I would urge my peers to carefully evaluate whether voting on a machine is a good idea,” Grooms said. “Each individual’s vote matters, so it is important to not make a decision without carefully considering its implications.”