Alumnus behind the camera 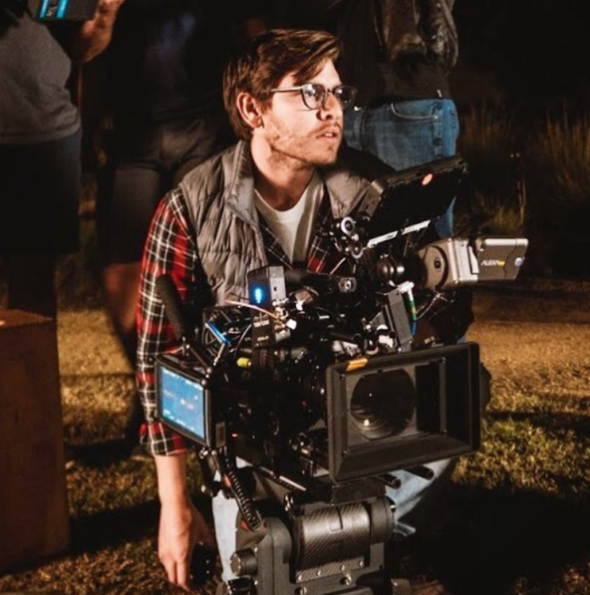 CCHS alumnus Mr. Matt Thompson ‘12 steadies the camera as he works to film a scene.

When Cathedral Catholic High School alumnus Matt Thompson ‘12 left the CCHS campus, diploma in hand, little did he know he would return just a few years later to film a successful Showtime feature.

“CCHS is my home, and it will always be my home and my roots,” Mr. Thompson said. “CCHS helped me in every single way. It gave me confidence. It gave me instruction. It gave me mentors.”

In the winter of 2016, Mr. Thompson filmed the 85-minute feature film Debunkers, Inc. on the CCHS campus alongside his mentor and current CCHS visual and performing arts teacher Mr. Ryan Andrzejewski.

“Matt gravitated right away to film,” Mr. Andrzejewski said. “His group took assignments seriously. I think they liked the potential, not just of storytelling, but the ability to influence viewers toward a certain perspective.

“In more advanced filmmaking years, Matt took the ball and ran with it.”

With the help of Mr. Andrzejewski, Mr. Thompson completed two feature films, both filmed on the CCHS campus, before graduating high school.

“[Mr. Andrzejewski] really supported me from an early age because he saw I was passionate about it so he let be borrow some cameras to use,” Mr. Thompson said.

Mr. Thompson’s first shot at high school film was a less serious attempt, as he used borrowed camera equipment and snuck onto campus to shoot.

“Between my sophomore and junior year, I made a feature length film that was also shot at CCHS, although we weren’t allowed to,” Mr. Thompson said. “Over the summer, we were just coming to campus and got kicked off a couple times, but it was just me and a bunch of friends.”

“The next year between my junior and senior year we did another film,” Mr. Thompson said. “This time [Mr. Andrzejewski] actually came on as a producer and helped bring back CCHS alumni that had gone to film schools. I was directing and wrote the script, and we also filmed a couple scenes at CCHS. [The film] was picked up and sold through some international outlets.”

Collaborating with former Dons is something Mr. Thompson values, as he continued this tradition by inviting CCHS students and alumni to work on Debunkers, Inc.

These young filmmakers were not the only Dons on set, as Mr. Thompson cast his past teachers Mr. Joe Filippone and Mr. John Montali as security guards. The cameo created buzz around campus and became a hit with current students.

“[Thompson] knew exactly what he wanted in the scene and told us how to deliver the lines,” Mr. Filippone said. “He was really precise in his directions, and it took us only a couple of takes to finish the scene. It was neat, in my perspective, to see his growth from a student to a movie director in such a short period of time.”

With a passion for mentorship and community service, Mr. Thompson assisted many high school students with film set experience. These young filmmakers also were invited to help, as the film’s tight budget necessitated the use of volunteer labor, and the students took up real responsibility on set.

Mr. Andrzejewski has grown accustomed to hosting young workers on set, as many of his own film students, including Ms. Abraham, assisted last summer with his latest feature film.

“We are currently in post-production on a full-length film that I produced and directed, which we wrote in advanced film here at CCHS last year,” Mr. Andrzejewski said. “We shot in June 2018, and [we] are working on the edit and sound design now.”

Fostering real experience for young filmmakers is a passion of Mr. Andrzejewski, as his love of teaching combines with his love of filmmaking.

“Students that are interested in filmmaking make teaching worth the daily grind,” Mr. Andrzejewski said. “Film is a passion of mine, so I don’t just teach it. I make films. To be able to work with current and past students is a blessing. I like to mentor students in the part of the business they are most interested in.”

Currently, Mr. Thompson is directing his own projects, and he recently worked as the director of photography on the History Channel TV show, Unidentified: Inside America’s UFO Investigation, which premiered May 31.