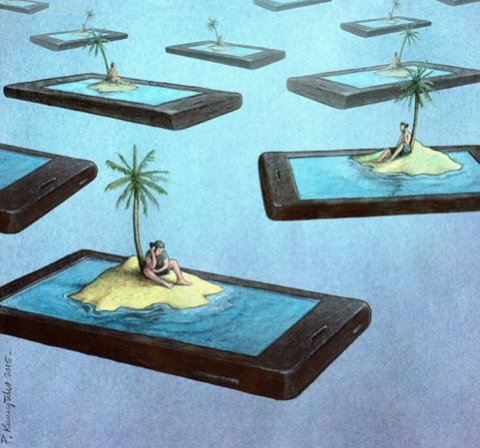 For most teenagers, social media represents a routine part of everyday life. The modern generation, devout users of technology, are often considered social media addicts. But for every teen glued to a screen, an increasing number of social media defectors are turning their backs on technology.

“People are usually surprised to hear I don’t have social media,” CCHS student Ceci Bacich ‘20 said. “It’s just so normal that people don’t think twice about it until they meet someone without it.”

According to a 2015 Pew Research Center report, 92 percent of teenagers surf online daily, including 24 percent who claim they use their devices “almost constantly.” But such persistent use often calls into question the possible adverse effects of social media and the possible benefits of life without it.

A recent University of North Carolina Chapel Hill study found only 5 to 15 percent of kids ages 13-17 swear off social media. Despite popular belief, teenagers who stay offline are not foreigners to social media or to popular culture; instead, they choose to forgo online interaction to avoid procrastination, self-esteem issues, and feelings of isolation.

“I am confident that social media would cause me more personal harm than good,” Bacich said. “I think it would become another place to procrastinate, because I can see myself wasting time on it and falling behind on my studies. But more importantly, it could become another platform for unneeded comparison and judgement.”

The Social Pilot, a social media managing agency, estimates users share more than 95 million photos on platforms, such as Instagram and Facebook, every day. People on Instagram with numerous followings and large spheres of influence are often celebrities, models, and moguls, who portray an unrealistic lifestyle to their followers.

Although most social media posts do not reflect reality, they still impact young people who base their self-worth on their online experience.

“Since social media is primarily a view of the best parts of someone’s life, it can lead people to compare themselves negatively to others,” psychologist Dr. Erica Wollerman said. “Their perception of what life is like for most people becomes skewed.”

“What we choose to expose ourselves to and spend hours of accumulated time on, shapes and changes the way we think,” Bacich said. “I think after being on social media for a while, I would be tempted to form judgements purely based on what people present on their profiles.”

Moreover, the idea social media fails to cultivate physical connection contributes to diversion from the relentless pursuit of likes and comments.

“People often feel forced to be connected with a large group of people to look more interesting and popular, but sometimes they don’t even know each other,” CCHS student Cindy Graf ‘20 said. “That aspect of social media always turned me off from it.”

“When you can edit your comments and appearance, you get used to being able to cultivate what others will think about you, and that is not possible in face to face interactions,” Dr. Wollerman said.

Although social media can be a positive online community where people connect with each other, it does not hold more of an allure than real-life connections and friendship, Bacich said.

“Not having social media has always been a personal choice,” Bacich said. “It’s one I’ve thought about a lot, and one that I continue to be confident in [not doing].”