Alex Wilkins: From Illness to Pageantry 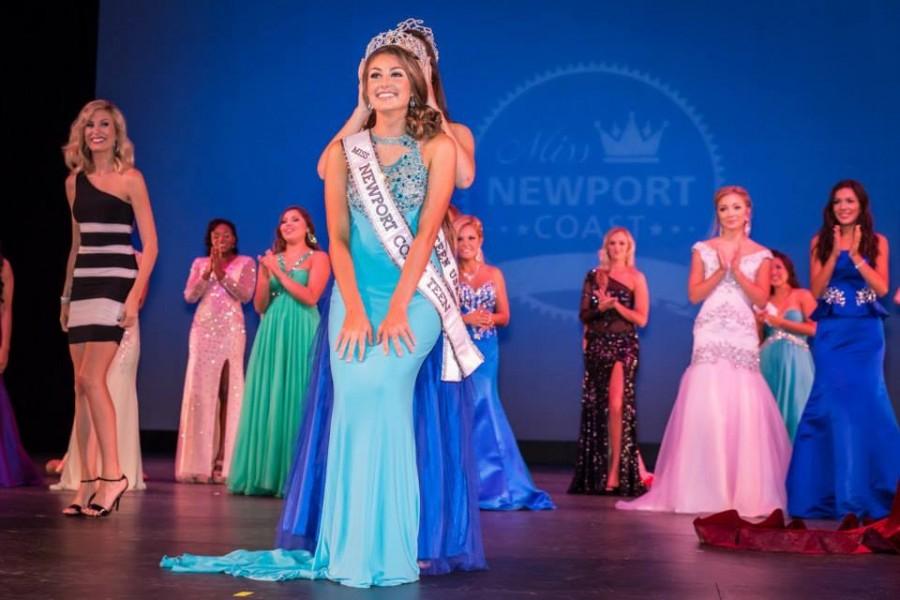 A year ago you may have never even recognized the talent and potential that one of our Cathedral seniors had within her. In fact, this hidden aura was not brought out until recently, and that was certainly not easy.

The 2014 Miss Newport Coast Teen USA, otherwise known as Senior Alex Wilkins, did not exactly fit the ‘pageant picture’ from the very start. Instead, she has overcome the unimaginable.

Alex suffered from a rare life-threatening illness that doctors could not diagnose for a year and a half. She lost her ability to walk and was in a wheelchair all of her sophomore year. At the beginning of her junior year, Alex lost the ability to eat and drink normally, and she began to lose a substantial amount of weight. Even worse, her heart was failing. Because of this, Alex got a nasal feeding tube put in her body for survival. “The doctors told me that there was no treatment and I would never recover,” she said. A permanent tube was scheduled to be placed in her on Valentine’s Day of 2014, but luckily, there was a turn of events.

“The day before the surgery the doctor called and said there was one unguaranteed treatment they could try,” she said, “and I had intensive in-patient treatment for three weeks. Thankfully, I was able to relearn how to properly accept and eat food.”

Now, Alex is almost full-functioning, but her mindset is definitely better than ever. Her illness taught Alex not to take her “life for granted and to live everyday to the fullest,” she said. This ebullient approach to life began something entirely new for her. Alex has been transitioning into her normal lifestyle again; but sooner or later, she also transitioned into the world of pageantry.

“I was encouraged to do my first pageant by a teacher and my family because the it was for scholarship money. My mom also did pageants when she was younger so I figured there was no harm in trying,” Alex said. In her first pageant ever, she won Miss Photogenic and a $1,000 scholarship, but most importantly, she found she “had a love for pageantry,” said Alex.

This newfound passion was something that meant so much more to Alex than just beauty and fame. “From the moment I finished my first pageant, I knew it was something I loved to do – and it was something that made me feel fully alive. There was no way I was going to let that feeling leave me,” she said. At her second pageant, Miss Greater San Diego Teen USA, she won first-runner up, and it “fueled the fire” in her to hopefully win the next pageant she would compete in.

On September 21st, Alex won Miss Newport Coast Teen USA, and had twenty-one spectators, who have supported her from the very start, cheer her on. One of her friends, senior Aidan McCay, said that “When she was sick, nothing really, and she was still the same old Alex. Now she has come out even stronger than ever before.” Another friend, Senior Rachel Flores, said that Alex “is such an inspiration to all of us. She always had that bright bold smile on her face, even if it was one of her tougher days. She taught me to always have faith in God and know that God has a plan for each and every one of us.”

In the crowd, too, her proud parents looked on with happiness and joy. “My parents have been such an important part of my pageantry. They have supported me every step of the way, and they have encouraged me to go after my ambitions. They have made sacrifices to help me become the best version of me I can be, and they have given everything so that I can be happy,” Alex said.

With her new crown, Alex has decided to pay it forward, and now represents children with life-threatening illnesses in her pageant platforms. She said what inspires her to help children is her first-hand understanding of knowing “how hard it is to suffer from an illness.” Her pageants give Alex an outlet to “show children that your obstacles do not define you and that with hard work, faith, and determination, you, too, can accomplish your dreams.”

With her pageant responsibilities comes the service of helping out the community, but this Miss Newport Coast Teen USA does not just lend any normal helping hand. “I have been able to have a voice and speak out about issues that concern me. God gave me a hardship, but He has allowed me to share that hardship with my community and allowed me to use my gifts to inspire others,” she said.

In aiding her community, Alex has completed numerous events and walks in honor of a variety of illnesses. She even received the opportunity to speak at her elementary school, Park Village Elementary in Poway, for their 20th anniversary. There, she “encouraged kids to go after their dreams.” Alex also met a very special girl named Rina who had recently beat Leukemia. Alex took pride in sharing her personal story with Rina and showing her that she is a “fighter and a brave young lady who can do anything she puts her mind to.” Two weeks later, Alex joined Rina and her team to walk at the Light the Night Walk for Leukemia and Lymphoma, where Rina was honored as a special guest.

It is not a surprise that Alex is able to do all of this and link her caring heart to where her passion truly lies. “The joy I get out of going out and serving people in my community reminds me why pageants are important to me. It isn’t about the title or the crown, it’s about helping others and being able to make whatever small difference I can,” she said. “I hope to make an impact in at least one person’s life and be able to serve not only my community, but my country as well.”

Yesterday, Alex had the opportunity to speak on the Rady Children’s Hospital Radiothon on 96.5 and shared her inspirational story with the listeners to help Rady Children’s raise money for the hospital and for research. Alex is also preparing for the Miss California Teen USA Pageant in Long Beach, California on January 9th to January 11th 2015.

Alex focuses on polishing her walking routines, exercising, eating right, but most of all, “having fun,” she said. Miss Teen USA is her ultimate goal, but the next step for her is to be crowned Miss California Teen USA.

In the end, Alex’s journey has revealed the amazing conquering ability she possesses to overcome the obstacles to get to where she is today: a beautiful young woman with so much ahead of her. “I have become confident in who I am, and I have realized that I am unique and have a purpose. I am blessed to be healthy enough to walk on stage and be confident in who I am, knowing I am doing exactly what God intended me to do,” she said.