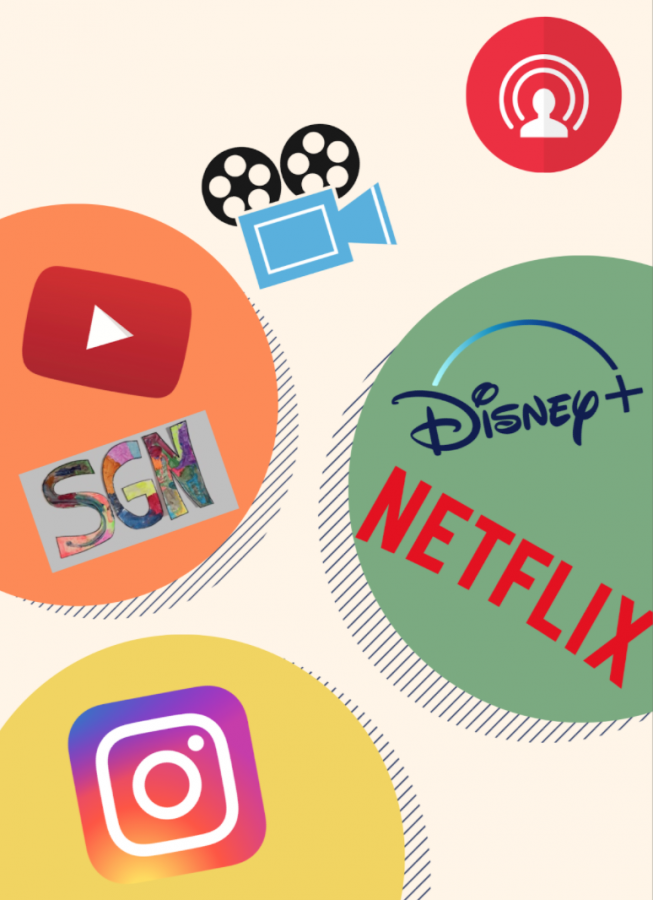 The entertainment industry is adapting to the challenges presented by COVID-19, with companies and individuals each seeking to reach their audience and provide entertainment while everyone is stuck at home.

Finding himself stuck in isolation, Cathedral Catholic High School Student Jake Titcomb ‘21, hoping to avoid a sense of cabin fever, uses his time during the California stay-at-home order to take advantage of the entertainment industry and individual creators’ newest media.

“The early release of content seems admirable because it shows that streaming services have their consumers in mind, but I have not really been affected by their decisions,” Titcomb said.  “That isn’t to say I haven’t been watching shows that had their releases during the quarantine—shows like Tiger King and Mrs. America have definitely made my quarantine more interesting. Overall, the accessibility of all these titles have helped pass the endless days.”

Being locked inside all day has posed a problem for more than just individuals, businesses and corporations have struggled to keep afloat under the closure of public areas. One industry in particular has seen pressure to adapt and continue reaching people: the entertainment sector.

In light of the quarantine from the spread of COVID-19, various celebrities, artists, and companies across the entertainment industry have implemented new and creative strategies to reach their fans and provide content for their audiences.

Taking the lead in response to increased shelter in place orders, Universal Pictures was one of the first movie studios to modify their film distribution, namely, allowing movies still in theaters to be rented and streamed at home.

“Universal Pictures will make its movies available in the home on the same day as their global theatrical releases, as current circumstances have made it more challenging to view our films,” a press release from Comcast’s official website said. “Given the rapidly evolving and unprecedented changes to consumers’ daily lives during this difficult time, the company felt that now was the right time to provide this option in the home as well as in theaters.”

Seeking to increase access to their media, Universal took the bold step of allowing new theatrical releases to be streamed in the comfort of one’s own home. This evolution has allowed the studio to continue functioning even as the economy shuts down.

“Universal Pictures has a broad and diverse range of movies with 2020 being no exception. Rather than delaying these films or releasing them into a challenged distribution landscape, we wanted to provide an option for people to view these titles in the home that is both accessible and affordable,” Jeff Shell, the CEO of NBCUniversal said in the press release. “We hope and believe that people will still go to the movies in theaters where available, but we understand that for people in different areas of the world that is increasingly becoming less possible.”

Universal is not the only film company that has taken action to adjust their business practices to benefit those stuck at home. The Walt Disney Company has also changed its plans for theatrical releases. While it is set to release certain new movies on Disney+ including the upcoming Artemis Fowl, however, Disney is still planning to release its major films, such as the upcoming Mulan remake, in theaters once the lockdown is over.

Alongside increasing its library on Disney+, Disney is also finding new ways to entertain people and lift spirits during quarantine. In a press release detailing their response to the COVID-19 pandemic, Disney highlighted new media they were producing alongside their humanitarian efforts.

“Disney Legend Ming-Na Wen, Yvette Nicole Brown, Ally Maki, John Stamos and Jeff Goldblum are among the actors who have read some of their favorite Disney stories—from the safety of their homes— in ‘Storytime with…, featured across Disney’s social media,’ the press release said. “Walt Disney Animation Studios is teaching fans how to draw popular Disney characters through its #DrawWithDisneyAnimation series on YouTube and other social media platforms.”

As the lockdown continues, the world has seen a growth in the consumption and popularity of streaming and internet based entertainment. Viewing the Google Trends data for the term “Netflix” shows a sharp increase in frequency beginning March 8 globally, coinciding with the beginning of lockdowns in several countries and states.

Large media corporations are not the only entertainers seeking to reach their audience during quarantine, individual artists and content makers have adapted to the realities of sheltering in place.

Live streams have become a common way for artists to connect with fans, with the “At Home Together” series of Instagram live videos bringing in countless musicians and singers to perform for digital audiences.

Besides music and movies, other entertainers have found other ways to bring smiles to people’s faces. “Some Good News,” a web show hosted by John Krasinski, has sought to lighten people’s spirits and entertain audiences, even including guest appearances from artists such as Lin Manuel Miranda.

Through rapid adaptation, the lockdown from COVID-19 has provided a unique opportunity for the entertainment industry, a fact not lost on consumers.

The entertainment industry’s adaptation to the COVID-19 pandemic has been swift and drastic in how it has changed the way people consume content. The long lasting effects of this shift are yet to be seen, however it is safe to say entertainment is changing.

“In the long term, I think that this reliance on streaming services will cause a more permanent shift in how people view entertainment,” Titcomb said. “Streaming services were already extremely popular before the quarantine, and now they’ve solidified their place on top for years to come.”